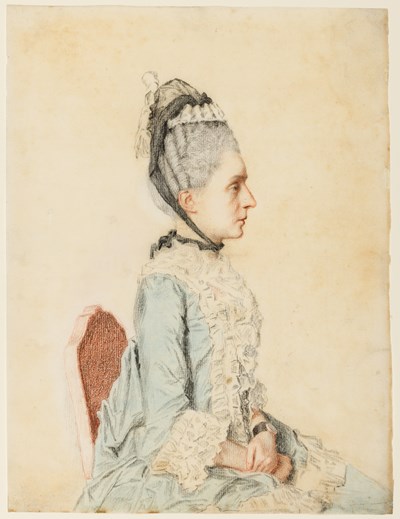 Portrait of a Seated Woman, in Profile to the Right

Black and red chalk, heightened with white chalk, on white laid paper.
The reverse of the figure partially silhouetted with blue and black chalk on the verso.
228 x 173 mm. (9 x 6 3/4 in.)


It has been suggested that this intimate portrait drawing depicts an as-yet unidentified woman from Geneva. The drawing can be dated to the period after 1757, when Liotard and his new wife settled in the Swiss city. On a stylistic basis, the drawing may perhaps be placed more precisely in the late 1770s, by comparison with such works of this date as a profile portrait drawing of the artist’s daughter Marie-Thérèse Liotard of c.1779, today in the collection of the Musée d’Art et d’Histoire in Geneva.

The present sheet is drawn in a combination of coloured chalks on a very thin, almost translucent sheet of white paper. The artist then traced the outlines from the recto onto the verso with slender lines of red and black chalk, before adding larger areas of tone in pale blue and black chalk. The thinness of the paper allows the areas of colouring on the verso to show through onto the recto, thereby creating a greater sense of depth and modelling in the features of the sitter. This precise and refined silhouetting of the figure on the verso of the sheet, creating a ‘negative’ image of the portrait on the recto, is entirely characteristic of Liotard’s working practice during his time in Geneva in the late 1750s and 1760s. As Christian Rümelin has noted of the artist, ‘beginning in 1758, he repeatedly resorted to a method he had already used during his stay in Rome, treating the reverse of relatively thin paper in a technique known from miniature painting. Adding colors to the back of portions of a composition heightens the intensity of those on the front, owing to the slight transparency of the paper. He did not employ this technique systematically, but only in autonomous drawings.’

Many of the artist’s later drawings adopted this novel technique of adding relief to a portrait by reinforcing the image on the verso, such as a profile portrait of Charles-Benjamin de Langes de Monmirail, Baron de Lubières, in the J. Paul Getty Museum in Los Angeles. As Alastair Laing has pointed out, ‘Liotard was a true draughtsman…[with a] relentless proclivity for experiment. One of the most fascinating instances of this is the device that he frequently used to obtain greater translucency and variety of colour in his drawings, without muddying their linear clarity, by washing a repeat image composed simply of taches of colour onto their versos.’

According to an inscription on the former backing board, this drawing was once in the possession of the industrialist Camille Groult (1837-1908), whose impressive collection of 18th century French and English paintings, drawings, pastels and tapestries was kept in his hôtel particulier on the avenue Malakoff in Paris.

According to a label on the former backing board, this drawing was exhibited at the Exposition universelle de 1900: Exposition rétrospective de la ville de Paris at the Musée Carnavalet in Paris in 1900.

The attribution of the present sheet to Jean-Étienne Liotard has been confirmed by both Marcel Roethlisberger and Renée Loche.

Portrait of a Seated Woman, in Profile to the Right