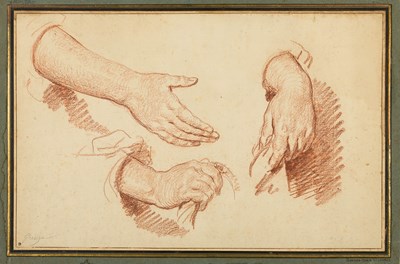 
The inventory of Jean-Baptiste Greuze’s property taken during his divorce proceedings mentions eighty-one studies of hands and feet by the artist, kept in his studio. As Irina Novosselskaya has noted, ‘Drawings constituted a special place in Greuze’s work. Without exaggeration it can be said that no other eighteenth-century French artist made so many careful studies for his paintings…Greuze’s sketches, often done in different tones of red chalk, are almost always done on large sheets (40 to 50 centimetres high), and they almost always depict figures, heads, and hands in large scale. Strong, bold strokes produce forms and portray movement...The artist was constantly searching for the correct placement or movement of hands.’ Furthermore, as the Greuze scholar Edgar Munhall has pointed out, ‘The attention that Greuze devoted to hands in general…and the skill with which he drew them suggests the importance he attached to them as expressive elements secondary only to faces and gestures in conveying the meaning of his dramatic scenes.’

All three studies of hands on this large sheet are preparatory for Greuze’s large painting The Hermit, or The Distributor of Rosaries (Le donneur de chapelets) of c.1780, sold at auction in 2013 and today in a private collection. The scene is set in a hermit’s grotto dominated by a crucifix where ‘a stern old Franciscan friar encircles the left hand of a reverent young woman in white with the first from a chest full of red rosaries. Brightly lit and standing in the center of the composition, she is the culminating cross in a living rosary of girls linked by limbs enacting extravagant expressions of emotion and affection. To enrich the contrast of male and female, youth and age, Greuze has added an epicene assistant holding the chest for the hoary-headed monk. That novice is as pretty as the young women from whom his pure and modest gaze is wholly averted.’

The large painting was probably commissioned from Greuze by its first recorded owner, Louis Gabriel, Marquis de Véri, who owned several other important paintings by the artist. As Pierre Rosenberg has noted of The Hermit, ‘Beyond the genre aspect, there is…a juxtaposition of contrasts – the happiness of innocent childhood and the simple joys of adolescence with the harsh wisdom of old age – which transcends the simple anecdote.’ A reproductive print after the painting, engraved by Henri Marais, was published in Paris in 1788.

The right arm and hand at the upper right of the present sheet is a study for the figure of a young girl in the centre of the composition of the painting, while the two other studies of hands were used for the kneeling girl in a red dress in the foreground. A closely comparable drawing by Greuze of four arms and hands, today in the Musée Bonnat-Helleu in Bayonne, contains studies for the left arm of the central figure and the hands of the two girls next to her.

Other preparatory studies by Greuze for The Hermit, or The Distributor of Rosaries include a large red chalk drawing for the figure of the hermit in the Louvre and a study for the feet of the kneeling acolyte at the lower right, in the Musée Bonnat-Helleu in Bayonne. A large but somewhat sketchy red chalk study for the two little girls in white behind the central figure was, like the present sheet, once in the collection of Jean Masson, while a study in red chalk for the head of the girl holding a chicken, at the left of centre of the composition, appeared at auction in Paris in 1999.

Further drawings of hands by Greuze are today in the collections of the Blanton Museum of Art at the University of Texas in Austin, the Musée des Beaux-Arts et d’Archéologie in Besançon, the Yale University Art Gallery in New Haven and the State Hermitage Museum in St. Petersburg, as well as one example formerly in the Curtis Baer collection.

The present sheet bears the collector’s mark of Jean Masson (1856-1933), who owned a considerable number of drawings by Greuze. Masson gave much of his extensive collection of ornamental drawings and prints to the Ecole des Beaux-Arts in Paris. His superb collection of 18th century French master drawings, however, was dispersed at several auctions in Paris between 1923 and 1927.