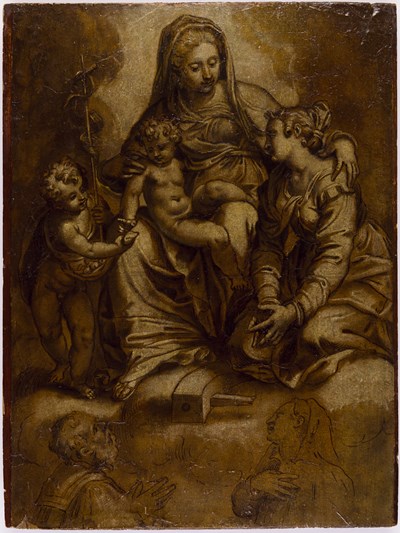 The Virgin and Child with Saints Catherine of Alexandria and John the Baptist, with Two Donors Below

Pen and brown ink and brown wash and oil, over traces of an underdrawing in black chalk, on paper laid down on panel and varnished.
Inscribed Paolo Veronese twice on the reverse.
Two red wax seals, each with the initials HA, on the reverse.
466 x 347 mm. (18 3/8 x 13 5/8 in.)


As Diana Gisolfi has noted, ‘Drawings form a significant part of Farinati’s oeuvre, especially his numerous chiaroscuro drawings on tinted paper, which were often used as modelli.’ The present sheet is likely to be a study for the type of devotional easel picture, sometimes painted on copper or slate, that Paolo Farinati produced for private patrons throughout his career. An interesting feature is the contrast between the highly finished nature of the main part of the composition and the more summary treatment of the donor figures at the bottom of the sheet. Although this large drawing cannot be related to any surviving work by Farinati, some compositional similarities may be noted with a late altarpiece of The Mystic Marriage of Saint Catherine, signed and dated 1603, in the Museo del Castelvecchio in Verona.

Among stylistically comparable drawings by Farinati are a Virgin and Child with Angels formerly in the Lever collection in Port Sunlight and a large drawing of The Annunciation which appeared at auction in 2001.

A previous owner of this oil sketch was the German art historian Kurt Bauch (1897-1975), who developed a particular specialization in the work of Rembrandt.

The Virgin and Child with Saints Catherine of Alexandria and John the Baptist, with Two Donors Below