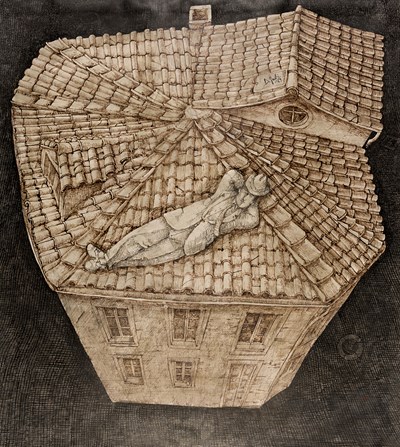 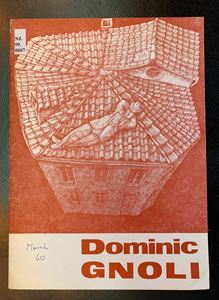 
Drawn in 1959, the present sheet may be associated with a group of pen and ink drawings by Domenico Gnoli; a series of views of the markets and restaurants of the city of Rome, mostly seen from high above, dating from between 1958 and 1960. As the artist noted of four other large-scale drawings from the same series, ‘Here are four of my ‘Roman’ drawings - I say Roman, not of Rome or about Rome, because, just like me, they are Roman by nature, not by vocation. Four Roman drawings then, done with care, with pedantic precision - a sort of inventory of the elements of the Rome in which I grew, possibly more a Rome I remember than a Rome I know. An inventory of umbrellas, chairs, crates, the tables of the sidewalk cafes, fish and vegetables stocked in the shady intimacy of small markets, the solemn and dark laundries - everything, in short, that moves on the cobblestones of the narrow, unpredictable streets of the old Rome. And the smells, the noise, and then at last the night…the empty wine shops - the ‘osterie’ as we call them - with the odds-and-ends remaining from some informal gathering, some ready to close with the chairs on the tables so the floor can be swept, only one table still set with the chairs around it, for the tired waiters’ dinners…and then the noise ceases, but the voices go on - the exclamative, mocking wise voices of the Romans. The wise voices of a wise city, these are - of skeptical, calm citizens removed from all urgency, removed quite often from these drawings too, so that the settings of their tranquil lives may speak for themselves...’

As a Times review of the inaugural exhibition in London of Gnoli’s drawings, held at the Arthur Jeffress Gallery in 1957, noted, ‘Mr. Gnoli’s drawings are complex, fantasticated, and full of busy goings-on of a mildly satirical absurdity...The success of imaginative excursions of this sort depends largely on the ability of the never-never land that has been created to sustain a measure of internal plausibility by which even the most extravagant oddities become, in context, the correct and acceptable thing. The world of Mr. Gnoli’s drawings may seem a largely synthetic and artificial one, but it does establish a sense of its own private logic by its exorbitant amount of quite rational detail.’

Three years later, a brief mention in The Times of Gnoli’s second London exhibition at the same gallery - in which the present sheet was included, serving as the cover of the catalogue - singled out this large drawing in particular: ‘Mr. Dominic Gnoli’s last London exhibition was of fantasticated drawings in which the fantasy lay as much in the subject-matter as in the highly elaborate pen technique. The drawings and paintings in his exhibition now at the Jeffress Gallery, 28, Davies Street, are seemingly concerned with more ordinary – even with “realist” – subjects, such as washer-women, piles of baskets, crates or folded linen, deserted beaches, and buildings. But a sense of fantasy and light humour still pervades them, in none more pleasantly than in the “Roman Dreamer”, stretched at ease on the tiled roof of his curious house.’