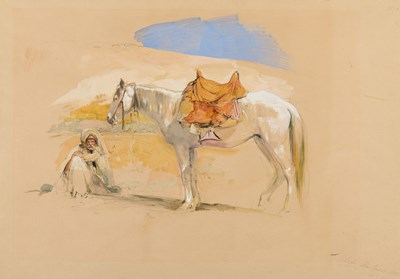 
During his decade in Cairo, John Frederick Lewis only seems to have made one trip to Upper Egypt, in 1849-1850 at the end of his stay, when he was accompanied by his wife Marian. The couple visited Thebes and Edfu, and travelled as far south as Philae, where they met Florence Nightingale, before returning north to Cairo via Kom Ombo, where they arrived in February 1850. About a hundred miles south of Luxor, Kom Ombo (also Kom Umbu or Ombos) was a town on the eastern bank of the Nile famous for its double temple, built during the Ptolomeic dynasty in the 2nd century BC and dedicated to both the crocodile god Sobek and Horus, the falcon god. Lewis made several drawings of the temple and the inhabitants of Kom Ombo, of which the present sheet is a fine example.

A printed inscription on the former mount, probably transcribed from a now-lost label, identifies the subject of this watercolour as the ‘Sheikh el Belled’ (shaykh al-balad, or the headman of a village). The sheikh is shown alongside his white horse, both apparently resting after a long journey. As has been noted of Lewis, ‘Time and again, his sketches from his Nile trip reveal that his interest lay in the rural life of Upper Egypt rather than with the ancient monuments that most tourists travelled there to see.’ Also drawn at this time was a stylistically comparable watercolour of An Arab with Two Oxen Ploughing at Kom Ombos, which, like the present sheet, was in the 1877 studio sale, and recently reappeared at auction in London.

This large sheet is one of two watercolours with identical titles included in the sale of the contents of Lewis’s studio in May 1877, the year after the artist’s death. It was purchased at the sale by the London-based framers, gilders and fine art dealers William and John Henry Vokins, who specialized in watercolours, and seems to have been sold on by them to the art dealers Agnew’s. The present sheet was acquired from Agnew’s by the Yorkshire councilman, industrialist and university chancellor Arthur Greenlow Lupton (1848-1930).

One of the two known watercolours of this title was sent by Lewis to the Royal Academy exhibition of 1870; an indication of the esteem in which he held the composition. The other version of this subject seems to have remained unsold in the posthumous 1877 Lewis studio sale, and remained with the artist’s widow until May 1897, when it was sold at auction.