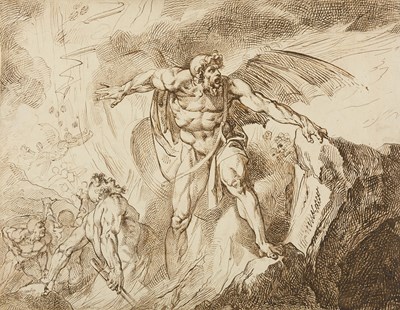 
This large drawing is a splendid example of the vigour of Luigi Sabatelli’s vigorous pen draughtsmanship. The scene depicted in this drawing, and the text on the verso that accompanies it, is found in Book I of the 17th century English writer John Milton’s epic poem Paradise Lost. Satan and his followers have been defeated by God in Heaven and cast into Hell, where they lie, entwined by chains, in a lake of fire. Satan does not repent his rebellion against God, but contemplates gathering his forces for another attack. The devils are freed from their chains by God, and Satan rises up out of the fiery lake, spreads his wings and flies to dry land. He summons Beelzebub, his comrade and lieutenant, and the rest of the fallen angels to join him on the shores of the lake of fire:

‘Thus Satan talking to his nearest mate / With head up-lift above the wave, and eyes / That sparkling blazed, his other parts besides / Prone on the flood, extended long and large / Lay floating many a rood, in bulk as huge / As whom the fables name of monstrous size…So stretched out huge in length the Arch-fiend lay / Chained on the burning lake, nor ever thence / Had risen or heaved his head, but that the will / And high permission of all-ruling Heaven / Left him at large to his own dark designs…Forthwith upright he rears from off the pool / His mighty stature; on each hand the flames/ Driven backward slope their pointing spires, and rolled / In billows, leave in the midst a horrid vale./ Then with expanded wings he steers his flight / Aloft, incumbent on the dusky air / That felt unusual weight, till on dry Land / He lights, if it were land that ever burned / With solid, as the lake with liquid fire…Such resting found the sole / Of unblest feet. Him followed his next mate, / Both glorying to have escaped the Stygian flood / As gods, and by their own recovered strength, / Not by the sufferance of supernal Power.’

As evidenced by the inscription on the verso of the sheet, the artist has here followed the text from the first complete Italian translation of Milton’s poem by Paolo Antonio Rolli, published as Il Paradiso perduto, poema inglese di Giovanni Milton. Rolli began working on the translation in 1719 and published the first six books in London ten years later. The full translation was published in 1735 and reprinted several times throughout the 18th century. Sabatelli’s treatment of the subject reveals something of the influence, during the 1790s and early 1800s, of the contemporary English interest in the ‘Sublime’, which he would have encountered in Rome in the work of such artists as Benjamin West and John Flaxman, as well as Fuseli, who had laboured throughout the decade of the 1790s on a series of 47 paintings of scenes from Milton’s life and works, which were eventually exhibited as a whole in 1799.

Stylistically, this large sheet has much in common with a series of large and highly finished pen drawings commissioned from the artist by Tommaso Puccini. An erudite connoisseur, Puccini seems to have had a particular penchant for dramatic and visionary scenes from literature, and encouraged Sabatelli to treat such themes in his work. Several large pen drawings made by the artist for Puccini are today in the Uffizi, including Philopoemen Kills Machanidas, signed and dated 1793, and two versions of Athenodorus and the Ghost. Among other drawings of similar scale and technique by Sabatelli are The Madness of Orlando in the Philadelphia Museum of Art and several works in private collections, including two pen and ink drawings of Dido Abandoned and Dante Conversing with Farinata degli Uberti.