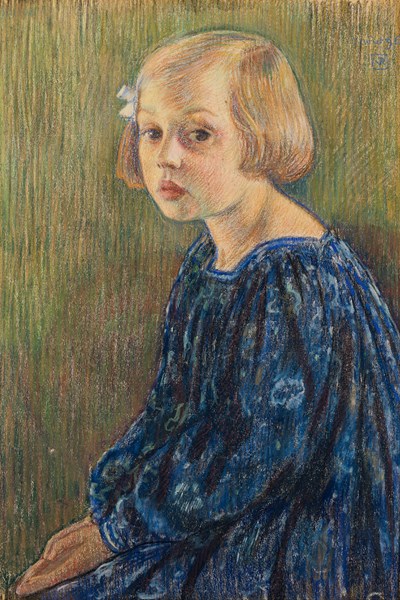 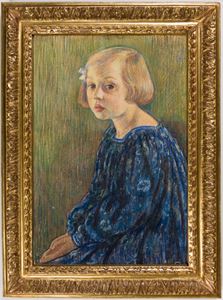 
This splendid pastel is a portrait of the artist’s only child, Élisabeth Van Rysselberghe (1890-1980), who is depicted here at the age of five. The artist made several portraits of Élisabeth, whose godfather was the Belgian writer and art critic Emile Verhaeren, from her childhood to young adulthood. (This pastel portrait was, in fact, first illustrated in an article by Verhaeren devoted to Van Rysselberghe, published in the November 1899 issue of Ver Sacrum, the official periodical of the Vienna Secession.) A similar painted portrait of her at about the same age and with the same bow in her short hair, is in a private collection. Sylvia Beach, the American-born bookseller and publisher who owned the Parisian bookshop Shakespeare and Company, once described Élisabeth as ‘a handsome, rather boyish girl’3, and she always seems to have kept her hair fairly short. In 1911 the young Élisabeth Van Rysselberghe had a brief but intense affair with the English poet Rupert Brooke, with whom she maintained a correspondence until his death from septicaemia in 1915, which left her devastated.

A few years after this portrait was drawn, when Élisabeth Van Rysselberghe was nine years old, her parents met the writer André Gide, who was to become close to both Théo and his wife Maria. Gide and Théo exchanged countless letters over many years, while the artist’s wife Maria kept a journal-cum-diary of Gide’s life, unbeknownst to him, for over thirty years. Their daughter Élisabeth was to have an affair with Gide, who was twenty-one years her senior, and had a daughter by him in 1923. As her mother Maria Van Rysselberghe noted of Élisabeth, ‘She was as if subjugated by Gide, attracted by a force to which, no doubt, she gave no name and which would later flourish.’ Élisabeth raised their child on her own, causing something of a scandal at the time, since she also refused to divulge the identity of the girl’s father, even to close relatives. Although Gide was devoted to both Élisabeth and his daughter, he too kept his paternity a secret from almost everyone he knew. Élisabeth eventually married the writer Pierre Herbart, Gide’s secretary, in 1931.

The present sheet remained in the sitter’s family for over a century, until 2006. After Elisabeth’s death in 1980 it passed to her illegitimate daughter with André Gide, Catherine Elisabeth Van Rysselberghe Gide (1923-2013), who had only discovered the identity of her true father when she was thirteen years old.