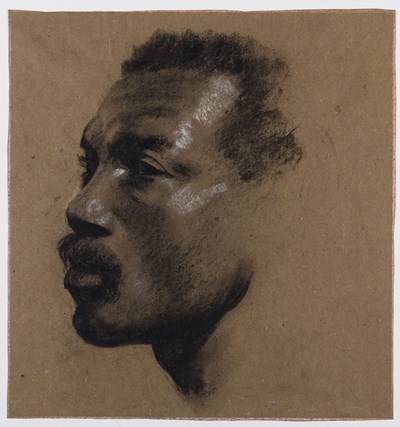 
Glyn Philpot’s superb draughtsmanship is readily evident in his work as a painter, and the present sheet is one of the earliest examples of an interest in the black male form that was to be a recurring motif in his oeuvre throughout his career. As his biographer has pointed out, ‘Black models…were not common in the work of artists of Glyn’s own time and earlier…What makes Glyn unique was that black men became a major theme in his paintings done in London and Paris, and the inspiration of some of his best work.’

This charcoal drawing may be dated to c.1912-1913, and depicts one of the artist’s first black models, identified only as ‘Billy’ in another drawing exhibited at the Modern Society of Portrait Painters in 1913, where it was shown alongside a small bust-length painting of the same sitter, now in a private collection. Both the drawing and the painting of ‘Billy’ - the first in a long series of depictions of black men by Philpot - were purchased at the exhibition by the politician and art collector Sir Philip Sassoon, who later commissioned a portrait from the artist. A powerful charcoal figure drawing of a standing male nude of c.1913, today in a private collection, may also depict the same model.

‘Billy’, the sitter of this drawing, reappears in Philpot’s large painting The Watcher on the Roof (also known as The Morning Prayer or The Prayer on the Roof) of 1913, which was acquired, the same year that it was painted, by the National Gallery of Canada in Ottawa. The present sheet may, in fact, have been intended as a preparatory study for the Ottawa painting.

Writing in 1921, the art critic Sir Claude Phillips noted of Philpot that ‘He has the gift, uncommon in these days, of bringing out all that is latent in the negro type of pathetic appeal. Rubens and Van Dyck, Rembrandt and his followers amongst the seventeenth century Dutch painters had this gift, but among moderns Mr. Glyn Philpot stands alone in the seriousness, the pathos, with which he has approached and solved an attractive problem.’