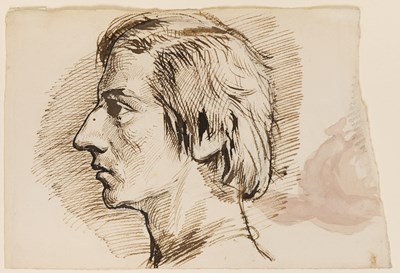 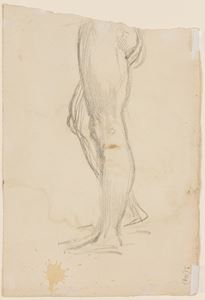 
Like much of George Richmond’s oeuvre of drawings and watercolours, this striking self-portrait study, which may be dated to the 1830s, remained in the possession of his descendants, and largely unknown to scholars, until recently. As Susan Sloman has noted of the present sheet, ‘Richmond was an enthusiastic and regular observer of his own features, painting several oil self-portraits in a distinctly Reynolds-inspired style…There are strong similarities between this drawing and other likenesses of the artist. He wore his hair this length throughout his life, deliberately covering his large ears, and his long nose and deep-set eyes are clearly defined in other drawn and painted self-portraits. A profile relief portrait of the artist made for his memorial in the crypt of St. Paul’s Cathedral by his son William Blake Richmond shares all the features seen here.’

Among other early self portraits by George Richmond is an oval miniature of c.1831 in the National Portrait Gallery in London. Further self portraits by the artist are today in the collections of the Birmingham Museum and Art Gallery, the Fitzwilliam Museum in Cambridge, the Uffizi in Florence, the National Portrait Gallery in London and the Yale Center for British Art in New Haven.

Provenance:
By descent in the family of the artist, until 2001
Christopher Powney, London;
Thence by descent to a private collection.