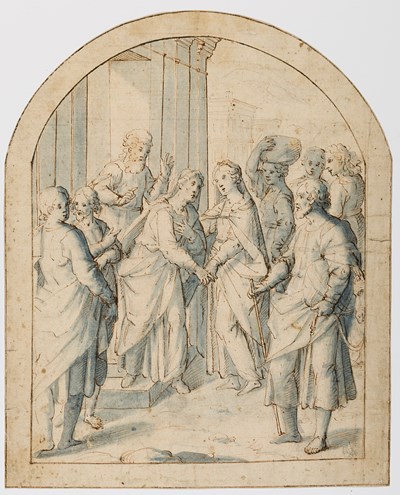 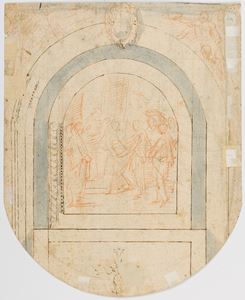 
A preparatory study for a now-lost or never-executed altarpiece of The Visitation, the present sheet may likely be dated to the early part of Giovanni Balducci’s stay in Naples, around the first decade of the 17th century. It can be compared stylistically with a drawing by the artist of the same subject, executed in pen and brown ink and brown wash over red and black chalk, in the collection of the Metropolitan Museum of Art in New York. Although close to the present sheet in handling and technique, the Metropolitan Museum drawing is, however, quite different in composition and orientation. Silvana Musella Guida has also suggested a further stylistic comparison with a drawing by Balducci of The Marriage of the Virgin in the Pierpont Morgan Library in New York, which shares with the present sheet an identical treatment of the faces, with small dots to mark the eyes, as well as way the hair and drapery is drawn.

The verso of the present sheet contains a rapid sketch in red chalk of the composition of the Visitation on the recto, together with a rough design for the surrounding frame for the altarpiece, with its arched top. The verso also shows Balducci’s sketch for the decoration of the chapel façade in which his painting was to be placed, to be surmounted by a coat of arms - presumably that of the donor of the chapel or the altarpiece itself – flanked by spandrels with winged angels.

Musella Guida has likened the red chalk sketches on the verso of this sheet with another, albeit earlier drawing by Balducci in the collection of the Morgan Library; a study of The Angels Appearing to Abraham, which is likely to date from the artist’s Florentine or Roman period.