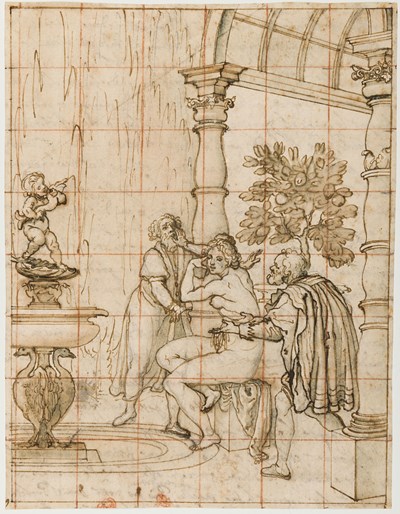 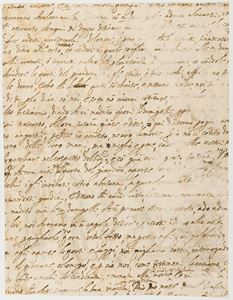 Susanna and the Elders


Like several drawings by Sigismondo Coccapani, the present sheet was once attributed to his teacher Ludovico Cigoli, as can be seen in the inscription ‘Del Cigoli’ formerly on the old mount; identical inscriptions appear on the 17th or 18th century mounts of a number of drawings by both Cigoli and Coccapani. The close relationship between the drawing styles of the two artists has only recently been made clearer. As Miles Chappell has noted, ‘the connections between Cigoli and Coccapani as draughtsmen are general in that the pupil shows affinities with the manner of his teacher and specific in that there are often complex historical circumstances that relate particular drawings to the name of Cigoli…Through relationships in drawings…it also becomes clear that Cigoli’s great influence on Florentine art of the Seicento was effected as much through his draughtsmanship as through his painting.’ Many of the most Cigolesque drawings by Coccapani date from the early part of his career, when he was working with Cigoli in Rome, and again at the start of his independent career in Florence.

Although squared for transfer, the present sheet cannot be related to any surviving painting or fresco by Coccapani. Elisa Acanfora has dated this drawing to the early 1620s and has further noted some correspondence with Coccapani’s painting of The Toilet of Bathsheba in a Florentine private collection, which is set in a similar loggia and includes the same fountain with a putto holding a dolphin that is seen at the left of the present sheet. Miles Chappell has likened this drawing stylistically to a drawing of The Assumption of the Virgin of c.1612 in a private collection and also notes the two old men are similar to those in a drawing of Figures Meeting at the Entrance to a Cityin the Louvre. He has further recently pointed out that the letter on the verso of the present sheet is in Coccapani’s hand and, at least in part, seems to relate to the subject of the drawing on the recto.

This drawing bears a drystamp (Lugt 2729), which denotes it as being part of a collection of 17th century Florentine drawings assembled by Sigismondo Coccapani and, possibly, his brother and fellow painter Giovanni Coccapani. (The family collection of drawings and prints was, however, apparently begun by their father, the goldsmith Regolo Francesco Coccapani.) Over a hundred drawings which bear this stamp are known, most of which are by Cigoli, with the bulk of the remainder by the brothers Coccapani and some of their contemporaries in Cigoli’s studio and circle, including Jacopo da Empoli and Matteo Rosselli. Most of the drawings with the Coccapani mark are in the Uffizi in Florence, and must have entered the museum’s collection as part of the Fondo Mediceo-Lorenese in the second half of the 17th century. Other drawings with the Coccapani drystamp are today in the collections of the National Gallery of Scotland in Edinburgh, the Musée des Beaux-Arts in Lille, the Ashmolean Museum in Oxford, the Fondation Custodia and the Musée du Louvre in Paris, the Pierpont Morgan Library and the Metropolitan Museum of Art in New York, the Istituto Nazionale per la Grafica in Rome, and elsewhere.

The art historian Sir John Pope-Hennessy (1913-1994) assembled a small but choice group of Italian drawings. The present sheet was, however, inherited by him from his mother, the noted historian and biographer Dame Una Pope-Hennessy (1875-1949).

Provenance:
Sigismondo and Giovanni Coccapani, Florence (Lugt 2729), their mark embossed at the bottom centre of the sheet
By descent to Giovanni Coccapani’s son, Regolo Silverio Coccapani, Florence
Probably dispersed with the rest of the Coccapani collection in the middle of the 17th century
Dame Una Pope-Hennessy, London
By descent to her son, Sir John Wyndham Pope-Hennessy, London, New York and Florence (his bookplate on the old frame backing board)
His posthumous sale, New York, Christie's, 10 January 1996, lot 23
Drue Heinz, London and New York.

Susanna and the Elders