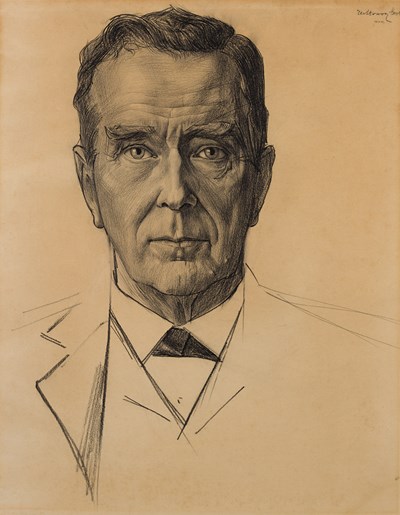 Charcoal and pencil.
Signed JthToorop at the upper right.
Inscribed Jan Heldring, with other illegible inscriptions and dimensions in the right margin.
The drystamp of the stationers Boekhandel A. J. Nuss, Amsterdam (not in Lugt) stamped at the lower right.
Inscribed ‘Portrait of my grandfather / Revd. Dr. Jan Lodewijk Heldring / of Amsterdam. Charcoal drawing / by Jan Toorop. / Ranulph Bye / Refitted and matted January 1982’ on a typewritten label pasted onto the old backing paper.
455 x 360 mm. (17 7/8 x 14 1/8 in.) [image]
485 x 406 mm. (19 1/8 x 16 in.) [sheet]


Beginning in the early years of the 20th century, at around the time of his conversion to Catholicism, Toorop painted and drew a number of striking portraits of priests and clergymen. He was particularly active in this regard during the years between 1910 and 1913, when he produced several arresting portraits of Jesuits at the Canisius College in Nijmegen. (It should be noted, however, that during the years in The Hague which found him most active as a painter of religious subjects for churches, he painted very few portraits of clerics.) Toorop’s avowed Catholicism did not, however, prevent him from making portraits of Protestant clergymen, of which the present sheet is a particularly fine example.

This large pencil portrait of Dr. Jan Lodewijk Heldring (1852-1923), a pastor and member of the Dutch Reformed Church in Amsterdam, is typical of Toorop’s portraiture in its precise and direct treatment of the head of the sitter. In many of his large-scale portrait drawings, the artist preferred to depict his subjects full face and head-on, seemingly in direct confrontation with the viewer. This large drawing has remained in the sitter’s family until recently, having passed by descent to Heldring’s grandson, Ranulph Bye (1916-2003), an American artist and writer.

A photograph of Jan Heldring as a younger man is contained in an album of photographs of members of the Heldring family and other Dutch families, in the iconographic collection of the RKD Netherlands Institute for Art History in The Hague.