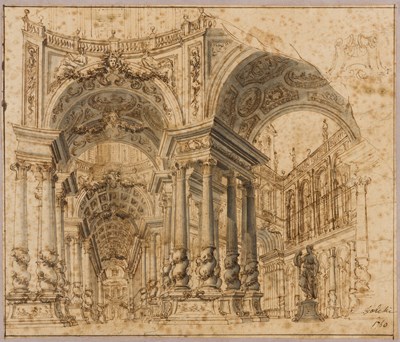 Design for a Stage Set: The Interior and Courtyard of a Palace Sold


Drawings by members of the Bibiena family are notoriously difficult to attribute to a specific artist as nearly every work produced by the members of the dynasty share a similar and distinctive style and handling of the pen and ink medium. They also were known to have often collaborated with one another, sometimes on the same sheet, further complicating the process of attribution. Large groups of drawings by the members of the Bibiena family are today in the museums in Dresden, Munich and Vienna, as well as in the collection of the Canadian Center for Architecture in Montreal.

The present sheet is a design for a stage set, an undertaking for which the Bibiena were perhaps most highly regarded. Only a very few of the family’s works as theatrical designers or decorators survive today, since most of their creations were ephemeral by nature. Nevertheless, the variety, magnificence and splendour of the Bibiena dynasty’s stage designs can readily be admired from such elaborate drawings as this.

Design for a Stage Set: The Interior and Courtyard of a Palace