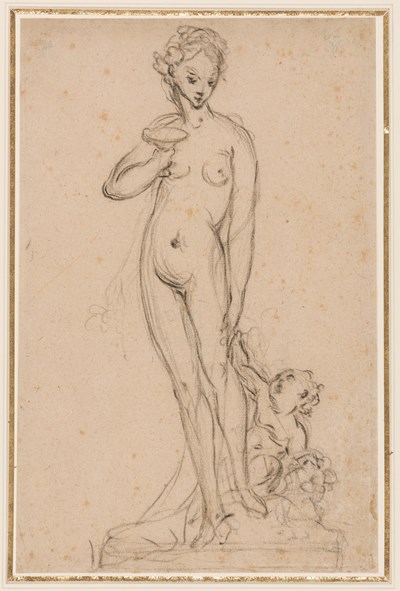 Design for a Sculpture: Venus and Cupid

Watermark: Partial with 1749 below.


The attribution of this drawing to Laurent Hubert is due to Alastair Laing. A closely comparable female nude appears in a rare signed drawing by Hubert of a design for a sconce, formerly in the collection of Richard Wunder, New York. Drawn in red chalk on the back of an engraved advertisement dated 1765, Hubert noted on the sheet that he lived on the ‘Quai d’Orléans isle St. Louis Notre Dame’ in Paris.

The handful of other extant drawings by or attributed to Laurent Hubert are all stylistically comparable with the present sheet. These include a study for a chimneypiece, in red and black chalk, in the Metropolitan Museum of Art, New York, and a signed design for a clock case in the collection of the University of Michigan Museum of Art in Ann Arbor, Michigan. Also similar are a design for a surtout de table by Hubert, also now in the University of Michigan Museum of Art, and a large drawing of Neptune and Amphitrite, executed in black chalk with touches of red chalk, which was on the art market in Germany in 1983. A signed drawing by Hubert of a design for a monument, dated 1782, is in the Kunstbibliothek in Berlin.

As has been noted, ‘By the nature of the subject matter of [his] drawings, it is evident that Hubert was never a sculptor in the strict sense but that he practiced rather as a designer of objects of household adornment that were intended to be carried out by specialized craftsmen.’

Design for a Sculpture: Venus and Cupid