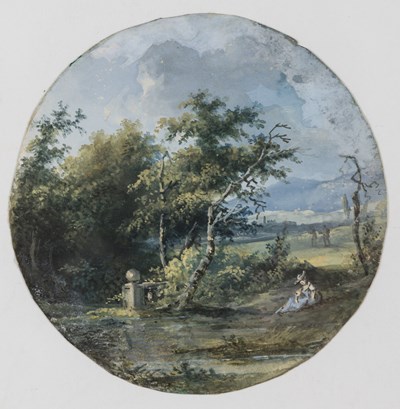 A River Landscape with a Seated Woman


As Francis Watson has noted, with particular reference to the present work, ‘Genre miniatures were almost as much in favour in France as portraits in little throughout the XVIII century, but landscape miniatures like those of Louis Moreau l’Ainé…are very rare. Working in gouache and water-colour on paper both in great and in little, Moreau specialised in delicately sensitive views of the scenery around Paris painted in a style which anticipates XIX century developments in landscape painting.’

Louis-Gabriel Moreau painted only a handful of miniatures of landscapes in this circular format, some of which have appeared on the art market in recent years. These include a pair of comparable miniatures on ivory depicting Diana and Actaeon and The Declaration, formerly in the Levaigneur, Féral and Bemberg collections, which was sold at auction in Paris in 2016, and a Riverside Landscape with a Fishing Boat and Sailing Vessels, sold from the Dreesmann collection in London in 2002. A circular oil on copper miniature by Moreau, depicting young women before an altar in a landscape, was sold at auction in Paris in 2011.

The provenance of this splendid landscape miniature by Moreau includes three notable collectors of the 20th century. The banker David David-Weill (1871-1952), chairman of Lazard Frères in Paris, was a prominent collector of paintings, drawings, miniatures, sculpture and furniture. He owned some twenty drawings and paintings by Moreau, including two other circular landscape miniatures. David-Weill’s collection of portrait miniatures was acquired en bloc by Sir Charles Clore (1905-1979), who also assembled an important collection of Impressionist paintings. This landscape then passed into the collection of Dr. Erika Pohl-Ströher (1919-2016). Over a period of nearly forty years, between 1978 and her death, Pohl-Ströher assembled a superlative collection of European portrait miniatures dating from the 16th to the 19th century.

A River Landscape with a Seated Woman