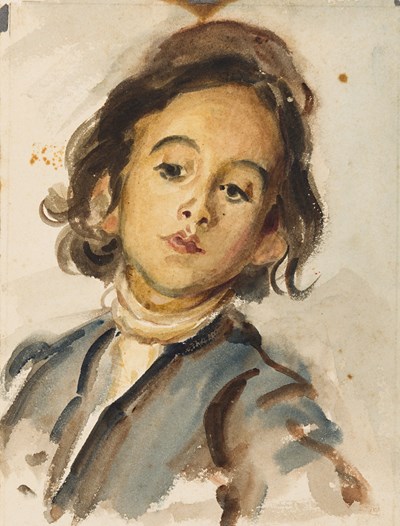 
The present is a portrait of the artist’s young son Edmond Dehodencq (1860-1887). Edmond was also a painter, and trained with his father, but died young, at the age of twenty-seven. He made his debut at the Salon in 1873 with a still life of oranges and pomegranates, and, apart from still life subjects, also painted genre scenes and pastoral views.

Alfred Dehodencq produced a number of charming paintings and drawings of his young children, such as a depiction of Edmond in the act of drawing and a study of three of the children also engaged in drawing, both of which were in 1910 in the collection of the artist’s son, Alfred Dehodencq, or a sketch of The Children of the Artist which once belonged to the artist’s friend and biographer, Gabriel Séailles. The culmination of Dehodencq’s depictions of his children occurs in the finished painting Interior (The Children of the Artist) of 1872.

The present sheet once belonged to the painter Georges Antoine Rochegrosse (1859-1938), who was a young pupil of Alfred Dehodencq at the very beginning of his career. Among Rochegrosse’s earliest exhibited works were scenes from literature, Egyptian, Roman and Byzantine history, but by the 1890s he was working in a more Symbolist vein. By the turn of the century Rochegrosse had come to be known as a fashionable painter of Orientalist and mythological subjects, finding inspiration for much of his work in his travels throughout North Africa. Dehodencq is known to have produced a portrait of Rochegrosse as a young boy.