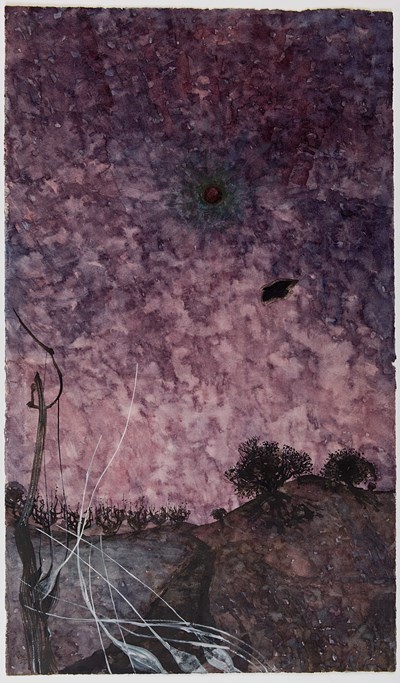 The Hillock at Dusk


Dated 1955, this large watercolour was drawn the same year that the art critic and journalist Robert Melville wrote of Alan Reynolds’s landscapes that, ‘If we are regaining confidence in the future of the most rewarding tradition in English art, it is thanks to the immense promise of his work and the evidence of his already remarkable development.’ As Melville further noted, in the catalogue introduction for Reynolds’s fourth one-man show, entitled The Four Seasons, at the Redfern Gallery in June 1956, ‘Alan Reynolds is the only painter I know who has succeeded in conveying to us his sense of a scale stretched far beyond the limits of sight through the medium of visionary landscapes which remain in close correspondence with the appearance of the natural scene.’

Provenance:
Ernest Brown & Phillips Ltd. (The Leicester Galleries), London, in 1956
Acquired from them by Shirley Thicman
Thence by descent to a private collection.

The Hillock at Dusk