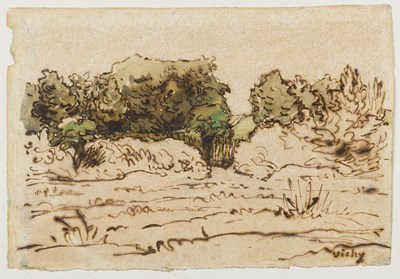 Landscape in the Environs of Vichy Sold


The present sheet belongs to a distinctive group of landscape drawings and sketches resulting from Millet’s stay in the spa town of Vichy, in the Allier département of central France, in the summers of 1866, 1867 and 1868. Accompanying his wife to the spas of the resort town, to which she had been sent for her health, Millet made numerous drawings and sketches of the hills and farmland around Vichy - in pencil, pen and watercolour – some of which were worked up into finished paintings and pastels upon his return to his studio in Barbizon. Soon after his arrival in Vichy on his first visit in June 1866, Millet wrote to his patron, the architect Emile Gavet, in Paris, ‘I have become acquainted with some of the environs of Vichy and have found several very pretty subjects. I make as many sketches as I can, and hope they will supply me with drawings of a different kind from those you already have…I want to provide myself with as large a store of documents [ie. sketches] as possible, and I have to look about me, since I do not know the country well.’ Characterized by a particular freedom of handling, the pure landscapes Millet drew in Vichy were to be critical in the development of his watercolour technique.

Millet often rented a carriage and explored the surroundings of Vichy, in particular the hilly landscape above the nearby town of Cusset. He seems to have been attracted to the scenery around Vichy and the Auvergne region, which reminded him of the landscapes of his childhood in Normandy, and in particular the way in which the undulating features of the landscape would partially hide the farms and buildings beyond them. Typical of Millet’s Vichy landscapes is a subtle tonal palette and a complete focus on the elements of the view, with an absence of human figures or animals. It has also been suggested that the composition of these landscape drawings at Vichy, characterized by high horizon lines, bare foregrounds and a precise but spare use of ink lines, may have been inspired by Japanese colour woodcut prints, which Millet had been studying and collecting with enthusiasm since 1863.

Millet’s practice in making these landscape drawings varied relatively little during his visits to Vichy. Using pocket sketchbooks of various sizes, he would begin a landscape composition with a quick sketch in pencil overlaid with pen and ink, to which he would sometimes add colour notes lightly written in pencil. On his return to his hotel room he would sometimes go over the drawing with washes of pale watercolour.

Although he sometimes complained, in his letters back to Barbizon, that the hot weather and the strict schedule of the spas prevented him from devoting as much time to his drawings as he would have liked, these summers in Vichy were, in fact, to be Millet’s most productive as a landscape draughtsman since the 1850s, and resulted in ink and watercolour drawings that have been described as ‘the greatest in all his oeuvre.’ It was these summers in Vichy that led Millet from being a painter of peasant subjects to a painter of pure landscapes. The artist never parted with, or exhibited, any of his Vichy drawings and watercolours, which only came to light after his death, when many examples were acquired by fellow artists and collectors.

A drawing such as this is likely to have been intended as a working study, and indeed it has been estimated that up to a quarter of the drawings produced by Millet at Vichy were later developed into finished compositions for sale. As Alexandra Murphy has noted of Millet’s drawings of this period, ‘the nearly two hundred sketches and polished watercolor drawings that can be connected with his Vichy visits cover an unexpected range of ambition; perhaps as many as fifty of them were turned into completed paintings and pastels at greater leisure in his Barbizon studio.’

Similar drawings by Millet of Vichy and its surroundings are today in the collections of the Louvre, the Museum of Fine Arts in Boston, the Kunsthalle in Bremen, the Metropolitan Museum of Art in New York, the Ashmolean Museum in Oxford, and elsewhere.

Landscape in the Environs of Vichy