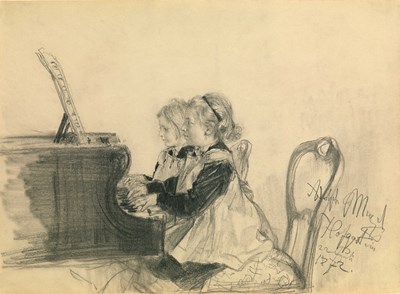 Therese and Grete Herrmann at the Piano Sold


Throughout his life, Adolph Menzel displayed a passionate interest in music, as evidenced in many of his letters. As he noted in one such missive, written in 1836 to his close friend Carl Heinrich Arnold, ‘I have come to the conclusion that music, if perhaps not the first of all arts, is incontestably the one which affects the heart most directly.’ Menzel was particularly fond of the music of Beethoven, Haydn, Mozart and Schubert, and was a frequent visitor to concerts and opera performances in Berlin. He also often attended (and drew) private hausmusikrecitals at the home he shared with his sister Emilie and her husband, the composer and conductor Hermann Krigar. Although highly knowledgeable about music, Menzel does not, however, appear to have played an instrument himself.

In the summers between 1872 and 1874, Menzel, Emilie and Hermann Krigar, and their two children Gretel and Otto were guests of the Berlin banker and art collector Magnus Herrmann (1817-1894) in the spa town of Bad Hofgastein in Austria. Herrmann and Menzel enjoyed a long and close friendship, and Herrmann was among the artist’s earliest and most important patrons. He owned several significant works by the artist, notably The Flute Concert of Frederick II at Sansoucci of 1850-1852, which he sold to the Nationalgalerie in Berlin in 1875. At the Herrmann family’s summer home, the Villa Carolina in Hofgastein, a studio for Menzel was set up in a gardener’s cottage, while he also had use of a studio at Pyrkerstrasse 14 in the town itself. As the collector’s daughter Agathe Herrmann later recalled, ‘Menzel lived with his family in the so-called Gärtnerhaus, where my father had a large studio built, from whose windows Menzel painted the famous ‘View of Hofgastein'. For several summers, Menzel and his family were our dear guests in Gastein.’ Menzel made numerous drawings of Hofgastein and the Alpine scenery surrounding the town, many of which were later developed into finished paintings and gouaches, as well as several appealing and informal sketches of scenes of daily life with the Herrmann and Krigar-Menzel families at the Villa Carolina.

The Herrmanns had four daughters; Clara (1851-1888), who was to marry the painter Albert Hertel, Agathe (c.1855-c.1904/09), Therese (b.1863) and Margarethe, known as Grete (b.1864), as well as a son, Paul (1857-1921). In July 1872, when Menzel made this charming drawing of the two youngest Herrmann children at the piano, Therese was nine years old and Grete was seven. Their elder sister Agathe, who came to own the present sheet, later recalled the circumstances which led to this drawing: ‘[Menzel] would go out in wind and weather but one day when there was a great downpour, he came into the music room where my two little sisters were playing four-handed the ‘Serenade’ by Haydn together on the piano. “Children, I want to draw the chandelier, play something for me”, he said to them, thereby capturing their unselfconscious attitude, and making the characteristic, picturesque portrait drawing of them with which he later delighted my parents.’

The present sheet is undoubtedly among the most delightful of Menzel’s drawings of young children. Therese and Grete Herrmann, in their matching dresses, sit on a pair of upholstered chairs in the music room of the Villa Carolina. The artist has affectionately captured the girls’ intense, silent concentration as they study the score of Franz Joseph Haydn’s Serenade before them, engrossed in playing the enchanting melody which Menzel must have enjoyed as he drew them.

Music was an important part of daily life in the Herrmann household, and since each of the members of the family played musical instruments, impromptu concerts were a regular occurrence at the Villa Carolina. As Agathe Herrmann recalled of one such time, ‘A brief intense thunderstorm, which we enjoyed only from the balcony...united us all in the music room. Herr Musikdirektor Krigar played the piano, my brother Paul the cello, my father the violin. We were all in the right mood for Mozart, and so our father's beautiful violin sounded with particular warmth, and Menzel, notwithstanding his full enjoyment of the music, took out his carpenter’s pencil and drew the musicians.’ In 1874 Menzel produced a drawing of Magnus Herrmann playing the violin, today in a private collection, and another of his eldest child Clara seated at a piano, now in the Kupferstichkabinett in Berlin. A pencil drawing of an unidentified man playing a cello, inscribed and dated ‘Hofgastein [18]74’, in the Ackland Art Museum in Chapel Hill, North Carolina, may also be added to this group.

In this virtuoso pencil drawing, which the artist presented as a gift to Magnus and Mathilde Herrmann, Menzel observes the girls with a tender and sympathetic eye. As one recent scholar has described the present sheet, ‘It is a very beautiful drawing, which once again shows with what attention Menzel confronted the world of childhood and adolescence.’ The peaceful and relaxing life Menzel enjoyed as a guest of the Herrmann family at the Villa Carolina in Hofgastein must have provided a welcome respite from his work on the large industrial painting of The Iron Rolling Mill, on which he laboured between 1872 and 1875.

Although this large drawing was included in several significant exhibitions in Berlin between the very end of the 19th century and the first quarter of the 20th century, it was last exhibited in 1929.

Therese and Grete Herrmann at the Piano