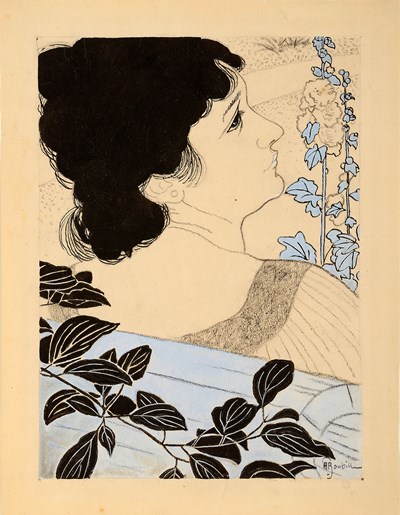 
An illustrated political magazine which took its name from the vendors who had proclaimed their offers and services in the streets of Paris since the thirteenth century, Le Cri de Paris was launched in 1897 by Alexandre Natanson. Since 1889, Natanson and his brothers Alfred and Thadée had published La Revue Blanche, an influential art and literary magazine, and Le Cri de Paris was initially issued as a supplement to the older publication. Natanson began the weekly Le Cri de Paris in an effort to target a more politically progessive audience, with each issue advertised in La Revue Blanche and selling at a price of thirty centimes.

This drawing by Auguste Roubille is a design for one such full-page advertisement for the magazine, which appeared in the issue of La Revue Blanche of 15th April 1898. Le Cri de Paris continued to appear long after the demise of La Revue Blanche in 1903. After more than two thousand issues, it ceased publication shortly before the German occupation of Paris in June 1940.