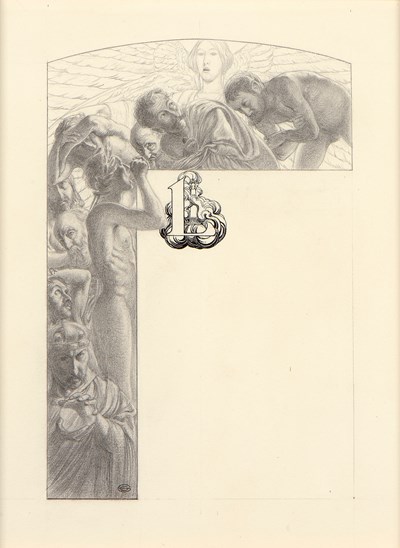 
The present sheet was produced for a deluxe illustrated edition of the Abbé Félicité de Lamennais’s 1834 collection of aphorisms entitled Paroles d’un croyant, published by Charles Meunier in Paris in 1908. Schwabe produced forty-six illustrations, forty-two framing or border compositions and more than fifty culs-de-lampefor the book, which was published in a limited, numbered edition of 166 copies. The artist began working on the project in 1906, and his drawings for the book were exhibited at the Champ de Mars in 1908 and at the Salon d’Automne the following year.

Many years later, in 1924, Charles Meunier had a copy of the book bound in an elaborate binding, to which he added a personal preface: ‘These visions of present torments, these dreams of future happiness, where Lammenais meets Dante, his brother in faith, hatred and glory, M. Carloz [sic] Schwabe has so perfectly understood them, that he makes us experience in our turn the wizardry of his draughtsmanship. His feelings of grief and of mystical sensuousness are given free rein in the illustration of this work, where is found, as in the rest of his oeuvre, a proud, irritated and suffering soul, ready however to succumb to the delicious weight of tears and the amorous ecstasy of faith.’

Other drawings by Carlos Schwabe for Paroles d’un croyant are today in the Musée d’Art et d’Histoire in Geneva and in several private collections.