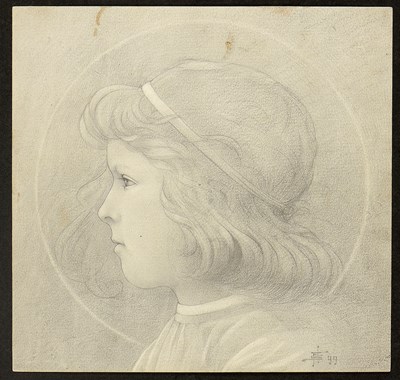 Head of a Young Boy in Profile


The present sheet may tentatively be related to the decorative mosaic frieze designed by Augusto Sezanne for the Stucky family funeral chapel in the Venetian church of San Michele in Isola, on the cemetery island of San Michele. The decoration of the chapel was commissioned by the Venetian-Swiss businessman and mill owner Giovanni Stucky a few years before his death in 1910. Sezanne designed the cartoons for the decorative scheme, superbly painted in a Pre-Raphaelite manner, which were then translated into mosaics by the firm of Salviati-Jesurum and the mosaicist Antonio Castaman, between 1903 and 1905. Although the youth in this drawing does not appear in the final mosaic decorations, which have recently undergone a comprehensive restoration1, this type of beatific head finds several stylistic parallels in the numerous angels in the mosaic frieze.

Head of a Young Boy in Profile