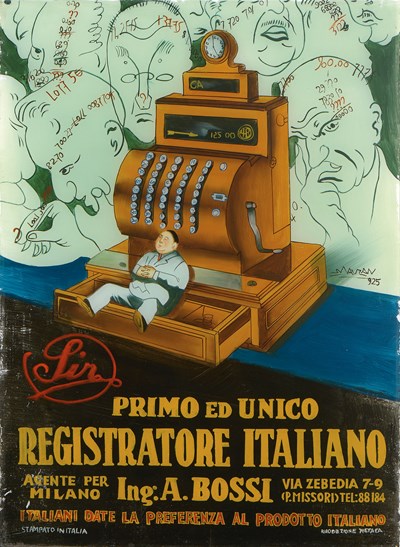 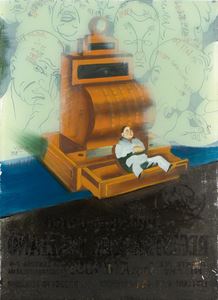 
Throughout the 1920s and 1930s, Achille Mauzan produced designs for some 2,000 postcards and around a thousand advertising and theatre posters. His distinctive style combined bright colours with witty caricatures, jaunty imagery and a bold sense of design. As one scholar has noted, ‘For Mauzan, a sensualist, a craftsman, advertising was a carnival of exotic imagery in rebellion against the rhetoric of restraint and reasonable consensus called for by corporate business advertising. The poster, like a circus barker, clamored for attention.’ Mauzan acted as both designer and lithographer, and his process usually consisted of drawing directly on to stone or zinc, so he could turn out press-ready posters which were worked in four colours and typically measured 140 x 140 centimetres.

Reverse-painted on a sheet of glass, the present work is a design for an advertisement for Sir, an Italian manufacturer of cash registers, which was printed in 1925 as a lithographic poster in colours. The bold typography announces the ‘Primo ed Unico Registratore Italiano’ (‘the first and only Italian cash register’), while the image adds a humorous touch wholly characteristic of the artist, depicting a shop owner contentedly enjoying his new register while letting it do the accounting for him. The text further highlights the native origins of the Sir machine, claiming that ‘Italiani date la preferenza al prodotto italiano’ (‘Italians give preference to Italian products’).

The same advertising image also appeared as one of a series of small decorative postcards produced by Mauzan.