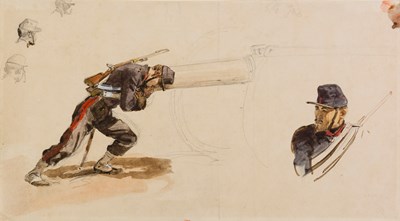 A Soldier Pushing a Cannon, and other Studies of Soldiers


The present sheet may be an early preparatory study for Isidore Pils’s large Crimean War painting of The Passage of the River Alma by the Division of General Bosquet, 20th September 1854, completed in 1861 and today in the Château of Versailles. Although none of the figures in this watercolour seem to appear precisely in the finished painting, there are significant similarities between the soldiers pushing the cannon in the large canvas and those seen in the present sheet.

Pils worked for four years on the massive painting of The Passage of the River Alma, which measured five metres by nine metres, and earned 20,000 francs for the commission. Intended for a room known as the Salle de Crimée at Versailles, the painting depicts a significant episode during the Battle of the Alma River. General Pierre Bosquet’s 2nd Division of the French army, led by colonial troops known as Zouaves, arrived at the mouth of the Alma River, where there were steep cliffs rising fifty metres high on the opposite bank. The defending Russian forces of the Moscow Regiment, believing the cliffs to be impregnable, did not defend their side of the river with artillery. The leading units of Zouave infantry swan across the river and scaled the cliffs, and upon reaching the plateau at the top engaged the Russian troops. They managed to hold the position until reinforcements arrived, including other soldiers who hauled twelve cannons up a ravine.

A Soldier Pushing a Cannon, and other Studies of Soldiers