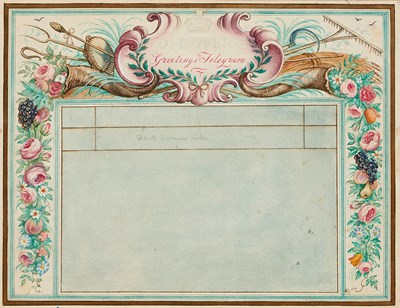 
As a recent monograph on the artist has noted, ‘As far as commercial art was concerned, Rex [Whistler] was fortunate in emerging as a thriving artist in the late 1920s, the golden age of advertising…Rex seldom spent long on commercial assignments, fitting them between more pressing commissions. He signed very few but retained most copyrights.’ Whistler produced posters for the London Underground, catalogues for Fortnum and Mason in Piccadilly, leaflets for Imperial Airways, posters for the Shell oil company and many other advertising campaigns.

This design for a Post Office Telegram form is second of two that were commissioned from Rex Whistler in 1936 by the General Post Office, and followed his successful design for the 1936 Valentine’s Day telegram – the first to be printed in several colours – which enabled people to send a nine-word message for just nine pence. While this was three pence more expensive than sending a standard telegram, it meant that the message would arrive on a specially-designed form. As the artist’s biographers Hugh and Mirabel Cecil have noted, ‘Stephen Tallents, the General Post Office’s enterprising first Public Relations Officer…[employed] gifted artists, including Rex. Illustrated greetings telegrams were new to Britain when Tallents introduced them in July 1935. In cheerful contrast to their past tragic associations in wartime, they were immediately successful. Rex’s Post Office Valentine Telegram soon became a collector’s item. An admirer of Rex’s art, George de Fraine, told Laurence Whistler that ‘in order to obtain a copy of the Valentine Telegram I had to send one to myself, and I have it with the words “Rex Whistler is a fine artist” on it, instead of a message.’ Whistler’s design for a telegram form proved very successful, and 50,000 of his Valentine’s Day telegrams were sent on that day alone in 1936.

The present sheet is the original design for the second of Whistler’s two telegram forms, used between June and December 1936. The printed colour lithograph measures 165 x 215 mm.