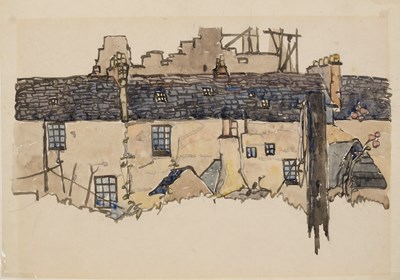 Back of Tenements, Paris


During their time in Paris, Jessie Marion King and E. A. Taylor lived in an apartment on the Rue de la Grande Chaumière in Montmartre, next door to an art school, the Académie Colarossi. One of the projects she worked on while in Paris was a commission she had received for eighteen watercolour illustrations for a book by Edmé Arcambeau about the bridges of Paris. Another book, planned but never-published, was to be devoted to views of Paris churches. As the King scholar Colin White has noted, ‘Jessie drew two rather formal illustrations of the Sacré Coeur and St Germain des Prés and then decided to expand the idea to include any buildings in the city she found interesting. She began to go on sketching walks, starting with the district around their own apartment at the back of the Luxembourg Gardens and progressing in ever-widening circles. She filled her sketchbooks with drawings in soft pencil which ranged from characters in the streets and architectural details of rooftops or shop fronts to such monuments as the Opéra, the Panthéon and the splendid Fontaine Carpeaux in the Jardins themselves...She also caught the feel of a more private Paris…She made each scene a personal vision and discarded even finished drawings if she felt dissatisfied with their balance or texture. Altogether she completed around 100 drawings.’

The present sheet is likely to have originated on one of King’s sketching outings in Paris. While three of her drawings were included in Paris Past and Present, a book written by her husband E. A. Taylor that appeared in 1915, most of her drawings of Paris were never reproduced or published.

Back of Tenements, Paris