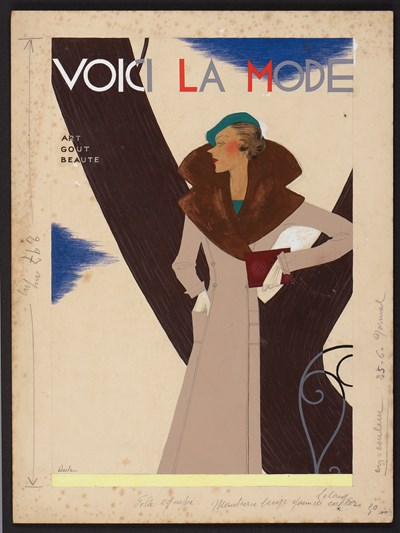 Woman in a Fur-Trimmed Beige Coat by Lucien Lelong: Design for the Cover of Voici La Mode Magazine


Although he seems to have been a gifted and prolific draughtsman – his work is found in several French fashion magazines, particularly in the 1930s – very little biographical information exists for Henry Weclawowicz, who signed his work as ‘Wecla’ throughout his career. In addition to several designs for the covers of the magazine Voici La Mode, Wecla also produced drawings for illustrations or advertisements for other popular fashion magazines, including Femina, Les Modes, and Modes et Travaux.

This fine gouache drawing is a proposed cover design for Voici La Mode, and can be dated to the middle or latter half of the 1930s, when the illustrated publication changed its name from Art Goût Beauté to Voici La Mode (although retaining the subtitle Art Goût Beauté). According to the inscriptions in the margin of the present sheet, the couturier responsible for the coat illustrated here was Lucien Lelong (1889-1958). A very similar design for a fur-trimmed coat by Lelong, also illustrated by Wecla, was published on the subscriptions page of Voici La Mode’s November 1935 issue, with the description ‘Coat [by Lelong], in Rodier wool, trimmed with nutria fur; the dress is of striped wool.’ (‘Lelong manteau, en lainage de Rodier, garni de ragondin; la robe est en lainage rayé.’).

Lelong’s designs of the 1930s, neoclassical in inspiration, with slim waists and long, sleek lines, still look modern today. However, his creations as a couturier have been overshadowed by his legacy in the defence of the Parisian fashion industry during the Second World War. At the onset of the war, many couture houses closed their doors or moved overseas, but Lelong, at the time president of the Chambre Syndicale de la Haute Couture, continued to represent the Parisian fashion industry. In 1940, after the occupying German forces appropriated the archives of the Chambre Syndicaleand attempted to move the entire industry to Germany, Lelong negotiated with the Nazis on behalf of the remaining ateliers, arguing that it would be impossible to replicate the French fashion industry in Germany. He was successful, and managed to keep the artisans working in Paris through the end of the Occupation. Arguably, without Lelong, the French tradition of haute couturewould perhaps have never have survived the war.

Woman in a Fur-Trimmed Beige Coat by Lucien Lelong: Design for the Cover of Voici La Mode Magazine