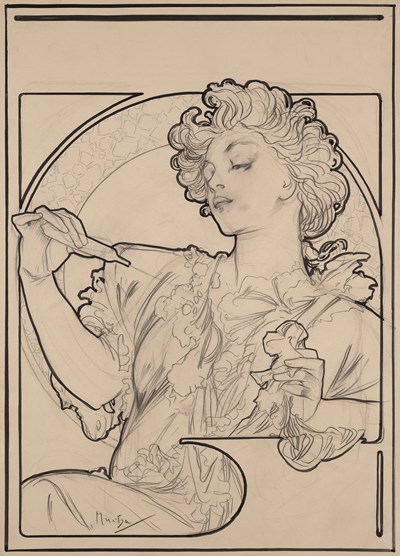 RECENTLY ACQUIRED BY THE MUSEUM OF FINE ARTS, HOUSTON, TX.


As the Art Nouveau scholar Petr Wittlich has noted, ‘Mucha’s personal vision of the new decorative style is asserted in the posters he created in Paris in the 1890s, and it is this body of work for which he is best known and internationally recognized…In the works of this period, Mucha used his amazing power of invention to its full capacity. His intuitive sense for the visually effective is evident throughout.’ Mucha's elegant women were particularly appealing to female audiences, and as a result he received several commissions for posters and other commercial work from cosmetic companies, including Parfumerie Bleuze-Hadancourt and Savonnerie de Bagnolet in France, as well as Carmichael's Luxuria Bath Tablets in England.

Drawn in 1896, the present sheet is Mucha's preparatory study for a poster advertising the perfume ‘Rodo’, produced by the Société des Usines Chimiques du Rhône in Lyon. Sold in the form of a patented squeeze-bottle or atomizer, which allowed the fragrance to be sprayed onto a piece of clothing, the perfume became one of the firm’s most lucrative products in the early years of the 20th century, and was apparently particularly popular in Brazil during the carnival season.

As the design for the Lance Parfum ‘Rodo’ poster has been described, ‘Mucha's beautiful young woman advertises a spray perfume, a novelty at this time if one believes the copy text which emphasizes the fact that the bottle dispenses the fragrance 'automatically'. The design is one of the earliest to feature what were to become Mucha's characteristic elements: a girl with buoyant hair, a dress whose every fold is meticulously drawn, a circular background with a mosaic pattern and decorative rosettes, well-executed typography which complements the theme of the poster, and, finally, gentle pastel colors.’ The same design by Mucha was also used on the labels of the small glass bottles in which the scent was produced and marketed.

An earlier preparatory study for the Lance Parfum ‘Rodo’ poster, of similar dimensions to the present sheet but drawn in pencil alone, was with the Grosvenor Gallery in London in 1978. Another, more finished study for the same poster, in watercolour and gouache but without any text, is in the collection of the Mucha Trust in Prague.