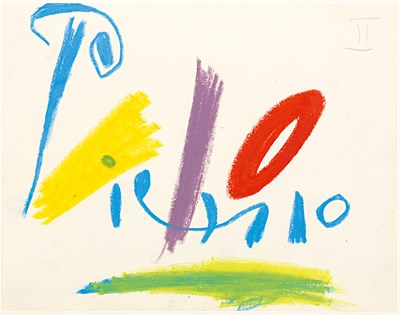 
This drawing was reproduced in facsimile for the cloth cover of Hélène Parmelin’s book Les Dames de Mougins, published in Paris in 1964 in a limited edition of 150 copies. An English edition of the book was published in London the following year, with the same cover illustration and the title Picasso: Women. Cannes and Mougins, 1954-1963. Parmelin, a novelist, art critic and reporter at the newspaper L’Humanite, was married to Picasso’s close friend, the painter Edouard Pignon, and the couple spent countless days at the artist’s home in Mougins, where he lived with his second wife Jacqueline until his death in 1973.

Parmelin begins her book by stating that ‘I have had the good fortune, the priceless experience of being alone for hours in Picasso’s studios at Mougins, entirely caught up in all those things which were entering my mind, invading it from all sides, without having to speak to anyone, without having to put my spontaneous feelings into words, without those awkward moments when you feel obliged to say something – whether right or wrong – to a painter as he shows you his canvases. For hours I was alone in those studios, exalted, moved as I had never been before, finding myself entirely on my own, my thoughts free to swim wherever and however they liked in the ocean of his thoughts.’

Picasso’s time in Cannes and Mougins, from 1954 until his death, were some of the most productive years of his career. As Parmelin describes one of her visits to Mougins, ‘Picasso, Jacqueline, and I had spent the last hour in the top studio at Mougins, looking at all the paintings of women assembled there – the Women of Mougins – looking at them one by one, in groups of four or five at a time, closing our eyes to all the other works…In Picasso’s mind, the works in this book are intended to express, in their own way, the living truth of his work: that is to say the work in progress, the thousand works in progress in all materials, the studios quite bare, quite full, as they are around him when he is working. They are what he calls the “intimate secrets of a studio.”’

This drawing, reproduced and printed on the cloth cover (though not the dust jacket) of Les Dames de Mougins, is one of nineteen versions of Picasso’s name, all drawn by the artist in coloured crayons, that were conceptualized for the project, and were later in the collection of the publisher Charles Feld. Throughout the book, each section of text begins with a letter drawn by Picasso, which he also created specifically for this project. As Feld writes in an endnote to Les Dames de Mougins, ‘The colored initial letters in this book were created by Picasso especially for this purpose. When approached by the French co-publisher, the painter laughingly said that it was so long since he had written out an alphabet that he had forgotten how. With colored chalks he set about creating the “Picasso alphabet” - but, as the reader can see, he forgot the E and supplied two K’s. When this was pointed out, he made a sheet of E’s and said, “There, if you want E, I give you E.”’.

In an essay accompanying a book of Picasso’s drawings of the period 1966-1968, published by Éditions du Cercle d’Art in 1969, Charles Feld wrote of the artist that, ‘He creates his own visual reality out of his thoughts and feelings. His art expresses the experiences and impressions that have touched and influenced his life. Thus, comic and tragic aspects of the world exist in his oeuvre side by side, heightened by the sureness and lightness of touch that he brings to his drawings.’

The present sheet is sold with a copy of the first edition of the English translation of Les Dames de Mougins, entitled Picasso: Women. Cannes and Mougins 1954-1963, published by Éditions du Cercle d’Art in 1965.