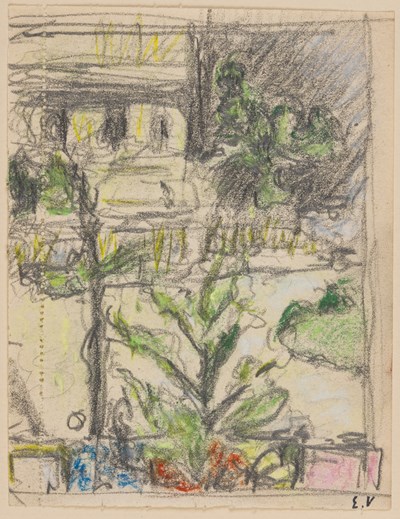 The Square Berlioz on the Place Vintimille, Paris


In 1907 Vuillard and his mother settled into a fifth-floor apartment on the rue de Calais, close to the Place Vintimille (today the Place Général Adolphe-Max), in the 9th arrondissementof Paris. The artist soon began producing numerous paintings, pastels and drawings of views of this picturesque small square, and the oval public garden, known as the Square Berlioz, at its centre. In 1926 he and his mother moved to an apartment on the square itself, at 6 Place Vintimille. As one scholar has noted, ‘Vuillard’s name has become almost synonymous with the Place Vintimille…He obviously delighted in the view from his windows overlooking the leafy enclosure dominated by the statue of Hector Berlioz, who had lived nearby, and across to the shabby dignity of the yellowish houses also confronting the little public garden with its strollers sunning themselves.’

This page from a small sketchbook is a preparatory study for a square-format painting of modest dimensions that is currently on the art market. Both the drawing and the painting can be dated fairly precisely to between late October and early November 1919, as each depicts, at the bottom of the composition, several colourful election posters attached to the railings of the park. These were for the general election held on the 16th of November 1919.

A similar view appears in a photograph of the Square Berlioz and the Place Vintimille from the artist’s apartment, taken by Vuillard in c.1910-1912.

Provenance:
The artist’s studio, Paris
Thence by descent in the family of the artist.

The Square Berlioz on the Place Vintimille, Paris