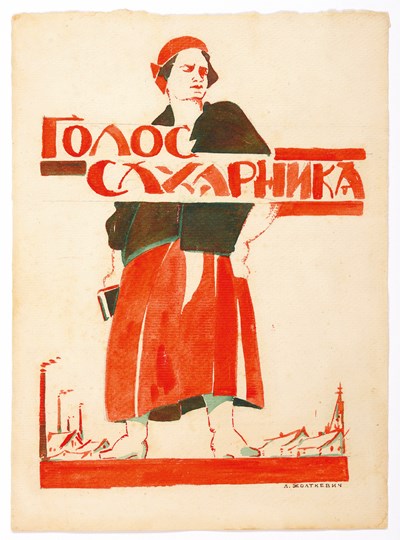 The Voice of the Sugar Factory Worker

Watercolour over a pencil underdrawing.
Inscribed ГОЛОС САХАРНИКА in red ink at the top.
Signed or inscribed А. ЖОЛТКЕВИЧ at the lower right.
280 x 203 mm. (11 x 8 in.)

The present sheet is likely to date from the 1930s, and may possibly be related to Lidia Zholtkevich’s work for the Russian pavilion at the 1937 Exposition Internationale des Arts et Techniques dans la Vie Moderne in Paris. The Soviet pavilion, awarded a gold medal by the organizers, commemorated the twentieth anniversary of the 1917 October Revolution. The front of the pavilion was dominated by a monumental, twenty-four metre high statue of The Worker and the Collective Farm Woman by Vera Mukhina, while the interior was made up of several halls featuring industrial models, social-realist murals, and a semi-precious stone mosaic map of Soviet industry, culminating in a mural by Alexander Deineka celebrating the legacy of the first two decades of Soviet power.

Adapting the visual language of the revolutionary movement of the 1920s, the present sheet - drawn with two bold colours of black and red, highlighted by a striking teal - depicts a female factory worker, with the prominent text translating as ‘Voice of the Sugar Factory Worker’. She is presented in a monumental stance, and wears the red headscarf of a supporter of Socialism. The image most likely refers to a telegram sent in September 1917 by the workers of the Georgievsky Company Sugar Factory in Petrograd (today Saint Petersburg) to the Russian Provisional Government in the city, condemning the possibility of a corrupt military dictatorship while underscoring the workers’ stance as worthy and principled Socialists. In the telegram, the workers of the Georgievsky Company Sugar Factory declared their full support of the Government: ‘we have utter confidence that only a unitary power in the person of the Provisional Government can save the homeland and the gains of the revolution, and that it will not allow a return to the past and thus assured we continue each in his own place to work calmly and with full energy for the good of the homeland.’

The Voice of the Sugar Factory Worker