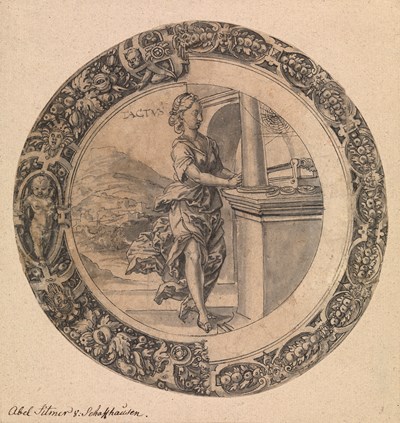 An Allegory of Touch: Design for a Stained-Glass Roundel Sold

Pen and black ink and grey wash, on paper trimmed to an oval and laid down on a backing sheet.
Inscribed TACTVS at the top.
Inscribed Abel Sitmer v. Schaffhausen on the backing sheet.
215 mm. (8 1/2 in.) diameter


Abel Stimmer’s manner of drawing was indebted to the example of his elder brother Tobias. Exhibited in Schaffhausen in 1936, the present sheet is likely to be a design for a roundel of stained-glass, although it may also have been used as a model for a piece of silverware, such as a plate.

The lawyer and art historian Hugo von Ziegler (1890-1966) assembled a collection of 16th century Swiss drawings, as well as coins and silverware, between the 1920s and the 1960s. A native of Schaffhausen, von Ziegler-Schindler collected in particular drawings by artists active in the city. Other drawings of stained-glass designs from the von Ziegler collection are today in the Museum of Fine Arts in Boston, the J. Paul Getty Museum in Los Angeles, the Metropolitan Museum of Art in New York and the Museum zu Allerheiligen in Schaffhausen.