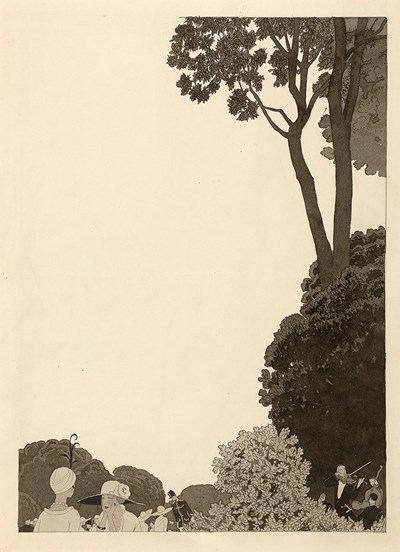 A Concert in a Garden Sold


This drawing was used to illustrate the story ‘La Rencontre d’un Passé’ by Lucie Delarue-Mardrus, which appeared in the magazine L’Illustration in December 1927. An author, sculptor, linguist and poet, Delarue-Madrus published seventy novels during her career, and much of her work took the form of a daring commentary on feminism and life between the wars. The story takes place after the devastation of the First World War, and describes a scene at an elaborate party, where people from all corners of the globe complain about their misfortunes. Unamused by the music, and more entranced by these ridiculous tales, the narrator describes her mood: ‘Jaded like everyone else, jaded by the pain of others, I was bored.’ Marty’s monochromatic design, where a portion of the paper is left blank for the text, illustrates the party which should be bright and vivacious. The nonchalant figures in the foreground and whimsical placement of the background figures are a simple yet accurate portrayal of Delarue-Madrus’s text: ‘In the Margit Islands, where we were once having tea, I would never forget how Lydia, while her husband was still talking in the distance, began to sing for herself the minor and slow words of a gypsy air, played in the groves by invisible musicians.’

As one contemporary writer noted of Marty’s work as an illustrator, ‘The very simplicity of his technique brought out the full wealth of Marty’s ideas, graphically expressed with delicacy of colour and arrangement.’

Two smaller pen and ink drawings by Marty for Delarue-Mardrus’s ‘La Rencontre d’un Passé’ were on the art market in Paris in 1975.

A Concert in a Garden