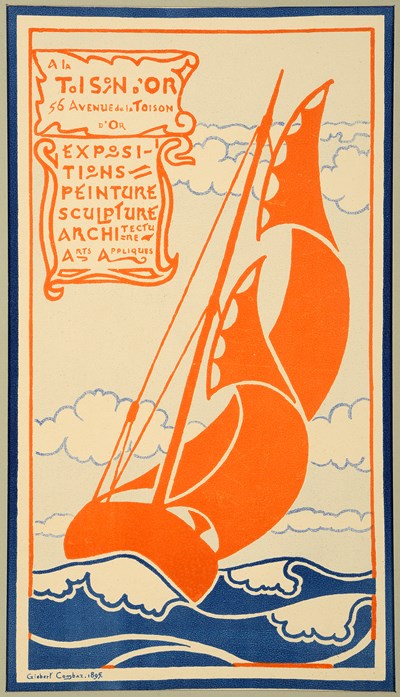 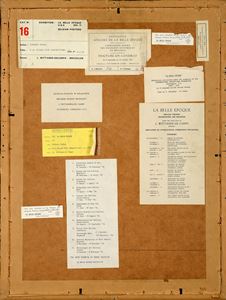 
In 1895, at the age of twenty-five, Gisbert Combaz created his first poster, for the second annual exhibition of the society La Libre Esthétique in Brussels. The success of this poster launched his career and reputation as an affichiste, and the artist was to eventually design posters for ten of the twenty exhibitions of La Libre Esthétique.

In 1895 the young Combaz received a commission to create a new poster for a new gallery, La Maison d’art, at 56, Avenue de la Toison d’Or in Brussels. As Jane Block writes, ‘Combaz, taking inspiration from the gallery’s location on the Avenue de la Toison d’or (“the Golden Fleece”), depicted the sea-faring Argo, the ship carrying Jason and the Argonauts on their quest for the golden fleece, sailing into the distance...By suppressing this text while increasing the abstract qualities of the final poster, Combaz heightened the graphic intensity. The decorative pattern of the double concave orange sails plays against the convex crest of the waves. The interrupted orange inner border at the lower right corner and lower left side adds a sense of kinetic energy which resonates in the billowy sails, movement of the waves, and even the sinuous curves holding the text. The result is a quintessential example of the new poster art, expressing its message with a remarkable economy of means.’

A significantly larger version of the poster, printed on three sheets, was printed in Liège in 1896. With green and grey tones added to the blue and orange of the earlier version, this 1896 poster also adds the name of the boat, Argo.

A later, similar design for a poster for La Maison d’art, also depicting a boat at sea but different in composition, was printed in a variety of inks on different coloured papers. This was one of the first works by Combaz acquired by a public collection in Belgium, when it was  bought from the 1897 exhibition of La Libre Esthétique by the Baron de Haulleville, director of the Musée des Arts Décoratifs et Industriels.

Impressions of the present poster are today in the collections of the Bibliothèque Royale de Belgique in Brussels and the Musée Communal d’Ixelles in Ixelles, as well as the Jane Voorhees Zimmerli Art Museum at Rutgers University in New Jersey.

As one scholar has noted, In all, Combaz ‘created or designed some twenty-seven posters, several of which stand as icons of fin de siècle art…[they] reveal his mastery of the medium through use of bold colors and contours…His overall concern for legibility and clarity of message is paramount in all his works. The beauty of the compositions reside in his perfect choice of colors, tone, and his simplification of the composition.’