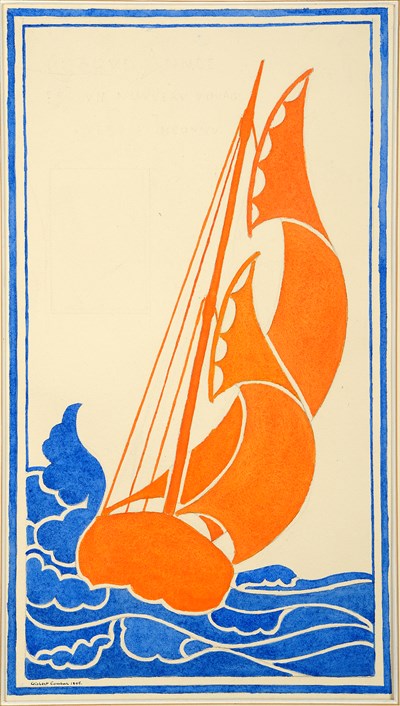 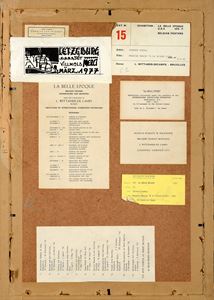 
The present sheet is a study for one of Gisbert Combaz’s earliest posters. In December 1894 Edmond Picard, a lawyer and art critic, opened a new gallery, La Maison d’art, at his former home at 56, Avenue de la Toison d’Or in Brussels. It became a centre of the avant-garde applied and decorative arts in Belgium, in much the same way as its Parisian counterparts; Siegfried Bing’s L’Art Nouveau and Jules Meier-Graefe’s La Maison Moderne. Combaz designed posters, vignettes for exhibition catalogues and invitation cards for La Maison d’art, which closed in 1900.

In 1895 Picard commissioned the young Combaz to create a new poster for the gallery, for which the present sheet is an initial design. As Jane Block writes, ‘Combaz, taking inspiration from the gallery’s location on the Avenue de la Toison d’or (“the Golden Fleece”), depicted the sea-faring Argo, the ship carrying Jason and the Argonauts on their quest for the golden fleece, sailing into the distance. An early watercolor study, bearing the motto “Chaque année est un voyage vers l’inconnu”, makes the apparent the comparison between the antique voyage to unknown shores and the modern artistic exploration encouraged at La Maison d’art…By suppressing this text while increasing the abstract qualities of the final poster, Combaz heightened the graphic intensity. The decorative pattern of the double concave orange sails plays against the convex crest of the waves. The interrupted orange inner border at the lower right corner and lower left side adds a sense of kinetic energy which resonates in the billowy sails, movement of the waves, and even the sinuous curves holding the text. The result is a quintessential example of the new poster art, expressing its message with a remarkable economy of means.’

Of the present sheet, Block notes, ‘[An] ink sketch in orange and blue that is close to the final work shows the seaworthy vessel without lettering and prior to the inclusion of clouds. Combaz subsequently eliminated the boisterous wave at the left that replies to the sails.’ A very faint inscription at the upper left of the sheet - later erased, perhaps by the artist - reads ‘Chaque année est un voyage vers l’inconnu’ (‘Every year is a journey to the unknown.’).

This watercolour was once part of the remarkable collection of late 19th and early 20th century Belgian graphic art assembled by Louis and Berthe Wittamer-De Camps, the owners of the town house known as the Hôtel Solvay on the Avenue Louise in Brussels. A masterpiece of Belgian Art Nouveau architecture and interior decoration, the Hôtel Solvay was the work of the architect and designer Victor Horta, and was built between 1895 and 1900. The house was acquired by the Wittamer family in the 1950s and remains a private home today, with its unique furnishings intact. Berthe Wittamer was a pupil of Combaz, and she and her husband became avid collectors of his work.