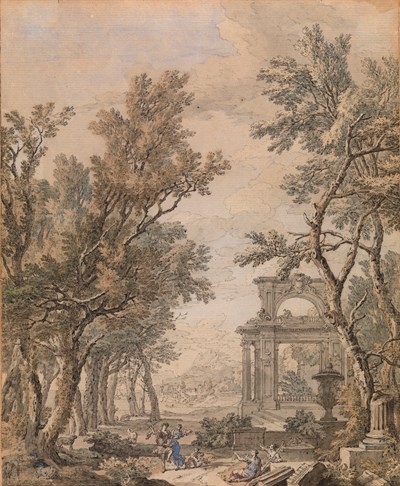 
In her catalogue raisonné of Moucheron’s works, Nina Wedde noted of the artist that, ‘The personal encounter with the Italian landscape and especially with the art of Gaspard Dughet radically changed his conception. In park landscapes Isaac also begins by discreetly introducing courtly elements in hunt scenes before turning his interest to formal garden layouts of a much more monumental nature, incorporating elements from Antiquity and from contemporary examples of design, people them with figures in tunics.’

As she further notes of Moucheron’s compositions, ‘The architectural structures that framed and dominated the terraces, pond systems and seaside beaches were inspired by classical examples. Porticoed temples, colonnades and archways as well as arches were crowned by antiques statues or small squat vases and were reached by grandiose steps, flanked by balustrades supporting prominent statues. Tombs and memorial stones such as obelisks added to the antique flavour. The setting was further enhanced by the omnipresent tall, decorative trees with their finely detailed leafage ranging in the watercolours from the light ochre of the foreground to the deep green and blue tones of the distance. The backgrounds showed vistas over Southern harbours with shipping on the water and towerlike buildings on the rocky coastlines or of mountainous landscapes rising above undulating hills. The low-set horizon left ample space for a sky dappled with white clouds where birds smoothly sailed. Figures attired in classical dress animated the scenes. They are engaged in leisurely activities, conversing, fishing in the ponds, carrying baskets of fruit and flowers or being poled over the water in small, ornate pleasure crafts. Dogs are ever present companions while peacocks grace a few balustrades.’

The present sheet is a particularly fine example of Isaac de Moucheron’sfinished watercolour landscapes. As Wedde has written of the artist, ‘The most complete and constant record of Isaac’s activity as an artist is preserved in the works on paper and his stature as a draughtsman of merit has seldom been contested.’

As a draughtsman, Moucheron produced finished drawings both in watercolour and in pen and ink; works which were much in demand by collectors. Subjects depicted include topographical views, Arcadian landscapes, scenes in the manner of earlier Dutch artists such as Nicolaes Berchem and, in particular, fantasy views of parks and gardens, known as 'hofgezichten'. At the time of Moucheron’s death some five hundred drawings remained in his studio and were dispersed at auction in December 1744, while many more must have been sold to collectors in his lifetime. Nevertheless, only around four hundred drawings by the artist survive today, and only relatively few of these are signed or dated.

The present sheet was once in the collection of C. J. Nieuwenhuys (1799-1883), a Belgian-born art dealer based in London.