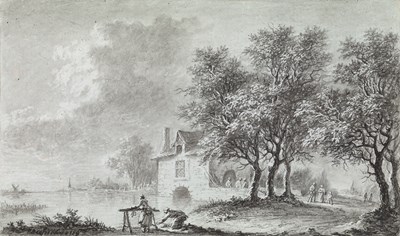 Washerwomen by a Lake, a Mill in the Background


The present sheet is an example of a particular type of drawing adopted by Desfriches in the latter part of his career. Using a coated grey-blue paper he had invented, known as a 'papier à tablettes', Desfriches produced landscape drawings of marvelous precision and delicacy. These drawings, often mounted on wooden snuffboxes, were regularly presented by the artist to particular friends. Another small papier à tablette by Desfriches of the same house that is depicted on this sheet, seen from a nearly identical viewpoint but with different staffage and dated the following year, was on the art market in Paris in 1925.

Another, very similar view, dated 1782, was part of the superb collection of 18th century French drawings assembled by Marius Paulme in the late 19th century and dispersed at auction in 1929.

Literature:
Peter Bower, ‘Aignan-Thomas Desfriches (1715-1800) and his Papier a Tablette and a Later Development of His Technique’, The Quarterly: The Journal of the British Association of Paper Historians, April 2019, pp.30-31, fig.3.

Washerwomen by a Lake, a Mill in the Background