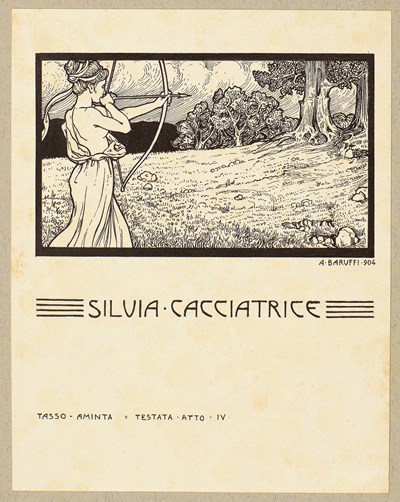 
The present sheet was intended for an illustrated edition of Torquato Tasso’s 16th century playAminta, for which Baruffi produced forty-nine drawings for illustrations, titles and initials. The book was, however, never in fact printed or published, although several of Baruffi’s drawings for Aminta were reproduced in the magazine Emporium in 1904. This drawing, which was to serve as the header for Act IV of the play, depicts the beautiful Sylvia, one of the nymphs of the goddess Diana, who rejects the fervent love of the Arcadian shepherd Aminta in favour of hunting.

As the Italian art critic Vittorio Pica opined, in one of the first articles on Baruffi in English, ‘My own personal preference, I confess, is for his illustrations of Dante’s Vita Nuova, and of Tasso’s Aminta, in which the figures accord well with the landscapes, imagination reconciles itself with reality, lights and shadow blend harmoniously together, and the whole presents a delightfully decorative effect.’

Provenance:
By descent in the family of the artist to the Baruffi collection, Rome, in 1977.