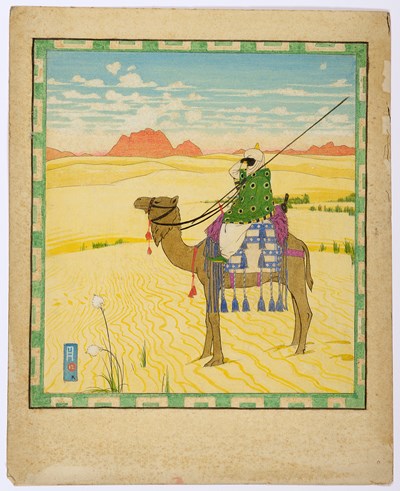 
Armfield worked in collaboration on many of his book illustrations, most notably with his wife, the writer and artist Constance Smedley (1876-1941), whom he married in 1909. The duo worked in tandem on several projects, including such books as The Flower Book, Sylvia’s Travels, Wonder Tales of the World and The Armfields’ Animal-Book. The present sheet is a study for an illustration accompanying the short story ‘How the Camel Unbent’, included in The Armfields’ Animal-Book, authored by Constance Smedley Armfield and illustrated with eight colour illustrations by Maxwell Armfield. The book was published in 1922.

The story concerns a ‘most patrician Camel’ belonging to one of the three Wise Men, who led a life of pampered luxury. Honoured by being chosen for a journey to the palace of Herod, King of Judea, the haughty camel looks down his nose on his surroundings and everyone in them, only to be treated in no manner of respect upon arriving in Jerusalem. Following the new, bright star in the sky, the Wise Men guide the camel and his companions to Bethlehem, where the camel is struck by the dignity with which other animals bear their misfortune and responsibilities. As the camel reflects: ‘These thin and weary asses did not endure disdainfully, nor set stimulating examples to each other, nor bear their lot with patrician fortitude: they suffered and endured as everyone was suffering and enduing, making no complaint and grateful for the least of mercies.’On leaving Bethlehem and the manger, bathed in the divine light of the star, the once-patrician camel is humbled and has found his peace.