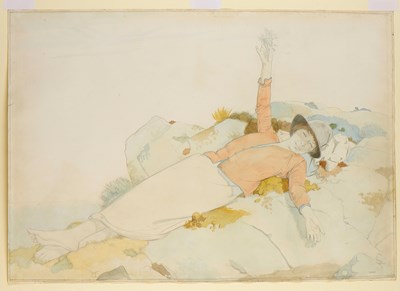 On the Hill of Howth, Co. Dublin


This very large sheet, drawn in a fine pencil with light touches of watercolour, depicts a woman on the clifftop at Howth Head in Co. Dublin. Orpen first visited Howth in 1907, and with his family rented a house called ‘The Cliffs’ there for a number of summers afterward. The house enjoyed a spectacular location, overlooking Dublin Bay with the city in the distance; as Orpen was to write several years later, ‘The view looking towards the mainland in the evening, from the top of the Hill of Howth, is wonderful and ever-changing. From Wicklow Head away off to the south, the chain of hills and mountains swing round in modulating curves right up to the near the city itself…Of an evening, as the sun dips, the water of the bay becomes brilliant gold…Or if the night is fine, the lights all along the shore, from Bray Head to Dublin, begin to twinkle.’

It was during these August vacations that Orpen was at his happiest, enjoying the company of his young family, as well as visits from friends and students in Dublin. As the artist’s biographer P. G. Konody noted, ‘These pictures of life by the sea and among the Irish hills...of open-air sketching and children playing, breathe the spirit of physical well-being and freedom from mental worries. They are filled with sunlight – the mild sunlight of a damp climate – and caressed by the gentle breezes of heaven.’

Orpen produced several paintings, watercolours and drawings while at Howth, mainly between 1909 and about 1913. As a recent scholar has noted, during this period the artist ‘managed, on top of everything else, to produce a magnificent series of works, conceived and drawn out of doors, mainly at Howth, and taking as their subject matter the everyday human material that surrounded him.’ His favourite subjects were his wife Grace and his two daughters; Mary, known as Bunnie, born in 1902, and her sister Christine, known as Kit, who was born in 1906.

The identity of the young woman depicted in this drawing remains to be determined, although it has been tentatively suggested that she may be Mary (‘Bunnie’) Orpen. She has also been identified as Vera Hone (née Brewster), a neighbour of the Orpens at Howth, who posed for a number of the artist’s paintings of this period, notably The Angler of c.1912 in the Tate. The same woman appears, dressed in an identical manner and with the same hat, lying on her stomach looking over the cliff edge, in a large drawing of identical technique to the present sheet which was exhibited in London in 1987.

The present sheet may be compared stylistically with a number of drawings made at Howth in 1910 and 1913, some of which were published as a portfolio of ten photogravure reproductions by the Chenil Gallery in London in c.1915. One of these, a pencil drawing entitled After Bathing, seems to depict the same woman, wearing the same hat.

Provenance:
Said to have been acquired in the 1950s from the Waddington Gallery, Dublin, by Mary (‘Molly’) Matthews
Given as a wedding present to her nephew, Desmond P. H. Windle, later Judge Desmond Windle, Sandymouth, Dublin, until 2014
Thence by descent until 2017.

On the Hill of Howth, Co. Dublin