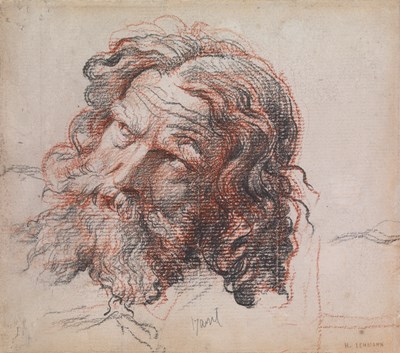 Study of the Head of a Bearded Man Sold


This is a study for the head of a kneeling figure of Widukind, the Germanic leader of the Saxons, near the centre of Henri Lehmann’s vast hemicycle painting of France under the Reign of the Merovingians and Carolingians is Reborn in Faith and Independence, painted between 1854 and 1856 for the domed ceiling of the throne room of the Palais du Luxembourg in Paris. In the painting, the pagan Saxon chieftain Widukind – Charlemagne’s main opponent during the wars between the Franks and the Saxons of the 8th century - is depicted to the right of the central cross, kneeling before a Frankish priest and being baptized into the Christian faith.

The present sheet was once one of four separate drawings in red and black chalk by Lehmann – all studies for the figure of Widukind - pasted onto a single backing sheet; the other three drawings included two nude studies of the kneeling figure on one sheet and two separate studies of his arms. A preparatory drawing in black chalk for the standing priest who baptizes Widukind is in the Musée Saint-Croix in Poitiers.

An oil sketch modellofor the entire hemicycle composition is in the Musée Carnavalet in Paris.

Study of the Head of a Bearded Man