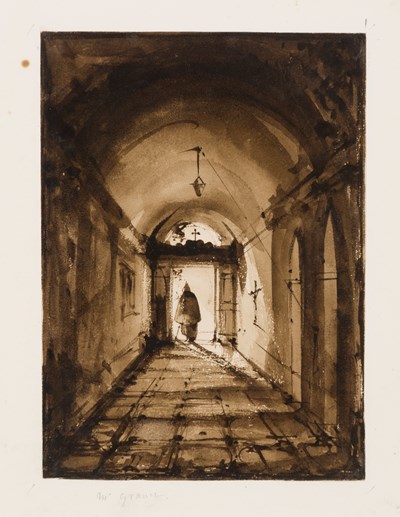 A Monk in the Doorway of a Monastery Corridor Sold

ACQUIRED BY THE RHODE ISLAND SCHOOL OF DESIGN, PROVIDENCE, RI.


Granet has been described as a ‘painter of cloisters’. In his memoirs, the artist often makes reference to the priests and monks he met in Rome, whom he particularly admired for their devotion to their chosen calling. He produced a number of finished genre drawings of monks in their cells or at prayer, which are generally unrelated to paintings and are only occasionally dated. Such works found many admirers throughout the artist’s clientele, and even the King, Louis-Philippe, wrote in a letter of 1826, ‘I like M. Granet’s souvenirs of Italy, those churches, those chapels, all that has a character I like, and then those ceremonies, those Italian priests or monks who delight me...All of this from the brush of M. Granet takes on a truth and vigor that carry one away...’

Although Granet was a gifted watercolourist, while in Rome he often produced highly atmospheric drawings in monochromatic tones of brown ink and wash, of which the present sheet is a fine example. Among comparable drawings by the artist is a study of Monks Entering a Cloister in the Blanton Museum of Art in Austin, Texas.

This drawing was probably at one time part of a small sketchbook. In his memoirs, Granet noted that he was never without a sketchbook, and he must have used a number of them while in Rome; three such sketchbooks, for example, were included in the 1893 sale of the collection of the 19th century architect and interior designer Hippolyte Destailleur.

A Monk in the Doorway of a Monastery Corridor