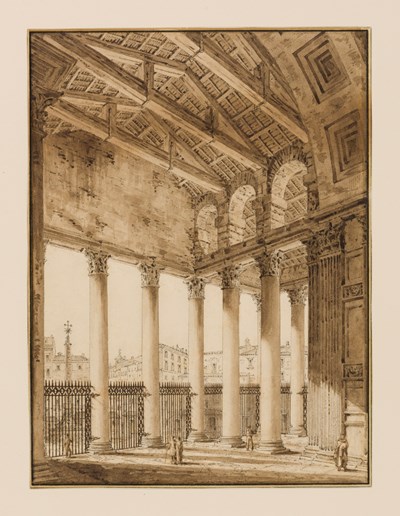 The Portico of the Pantheon, Rome Sold


Victor-Jean Nicolle has been described as ‘a conscientious and precise draughtsman, somewhat cold but not devoid of a certain poetic power.’1He almost never dated his drawings, so a chronology of his oeuvre as a draughtsman is difficult to establish. Nevertheless, the present sheet may be approximately dated to the artist’s second period in Rome, between 1806 and 1811. Nicolle treated the subject of the Pantheon in Rome several times, although usually with the ancient building viewed from the front, with the Piazza della Rotonda in the foreground, as seen in an oval watercolour in the National Gallery of Art in Washington D.C. and another in the Musée des Beaux-Arts in Rouen.

As has been noted of the artist, ‘His innumerable drawings, in various techniques of which watercolour seems to have been the favourite, have a scrupulous regard for accuracy which makes them of particular value as historical documents. His line may have something of the dry precision of an architect’s tracing, but this is relieved by his feeling for the picturesque, by his precise observation of minute details, and by the sense of atmosphere which he conveys with the clear light of his transparent washes.’

Furthermore, as Pierre Rosenberg and François Bergot have written, ‘Nicolle appears to have been sensitive to the charms of ancient ruins as to the picturesque qualities of street scenes in a Rome where the past and present are felicitously interwoven, in a calm, deserted Rome, bathed in a streak of morning light.’

Otto Wittmann (1911-2001) worked for thirty years at the Toledo Museum of Art, becoming its director in 1959, and is credited with establishing the museum’s collection as one of the finest in America. On his retirement from Toledo in 1977, he served as a trustee, consultant and curator at the J. Paul Getty Museum in Malibu, between 1979 and 1989.

The Portico of the Pantheon, Rome