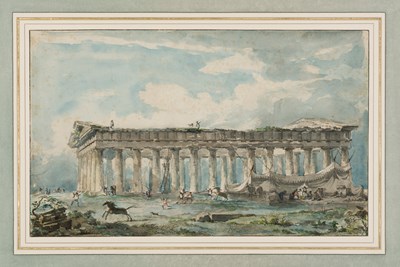 The Temple of Segesta in Sicily Sold


This is a preparatory drawing for an engraved illustration in the Abbé de Saint-Non’s lavish Voyage pittoresque, ou description des royaumes de Naples et de Sicile. Published in Paris between 1781 and 1786, the five volumes of the Voyage pittoresquemust rank as one of the finest books of the 18th century. With a text by Dominique-Vivant Denon and illustrations by Desprez, Châtelet, Hubert Robert, Jean-Honoré Fragonard, Jean-Pierre Houel and Pierre-Adrien Pâris, among others, the book was the most complete survey of the sights, customs and cultural traditions of southern Italy that had appeared up to that time. Desprez drew a total of 136 watercolour illustrations for the Voyage pittoresqueand was, alongside Châtelet, the most significant artistic contributor to the volumes.

Desprez, Châtelet and Vivant Denon spent a total of six months in Sicily, between June and November 1788, and Desprez probably visited Segesta sometime in July or August of that year. The Doric temple at Segesta, near the western tip of Sicily, is thought to have been built around 417 BC, and is one of the finest surviving examples of a Hellenistic temple. Placed on a hilltop outside the ancient Elymian city of Segesta, the temple stands in splendid isolation and is visible for miles around. Although it is unusually well preserved today, the temple appears never to have been fully completed, since it lacks a roof, an altar, and any painted or sculpted ornamentation.

The engraving after the present watercolour, executed by the artist and printmaker Jean Duplessis-Bertaux, appeared in the fourth volume of the Voyage pittoresque, published in 1783, with the caption ‘Petite vue Laterale du Temple de Segeste’. A preparatory sheet by Desprez of pen and ink sketches of the temple at Segesta is in the Nationalmuseum in Stockholm. The artist also produced a watercolour of the interior of the temple at Segesta for the Voyage pittoresque, which is now in the collection of the Albertina in Vienna.

As Pierre Rosenberg has noted of another of Desprez’s watercolour drawings for the Voyage pittoresque, in terms equally applicable to the present sheet, ‘The humour and vivacity of his observation, and his imagination, make the drawing something more than just an exact topographical record.’ Similarly, as Mary Tavener Holmes has recently commented, ‘Desprez, an architect with a talent for set design and an interest in classical antiquity…was a logical choice to provide drawings for the abbé de Saint-Non’s Voyage pittoresque…While Desprez may have been approached initially as an architect, it was his scenographic talents that prevailed. Far from being dry schematic renditions, his scenes are alive with action, the small figures (so reminiscent of the work of Jacques Callot, which he must surely have known) expressive and energetic.’

The Temple of Segesta in Sicily