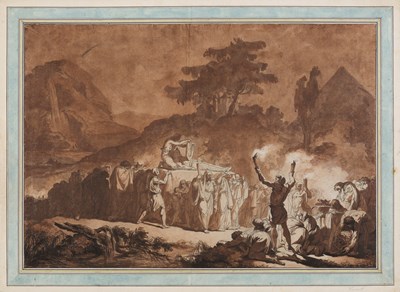 
Dated 1772, the present sheet was drawn in Rome at the start of François-André Vincent’s period of study there at the Académie de France. As Jean-Pierre Cuzin has noted of this drawing, ‘This totally imaginary scene seems to represent a funeral procession, with a pyramid in the background at the right. The landscape here holds a prominent place. Note the audacity of the nocturnal representation, the energy and speed of the brush, the strong contrasts of shadow and light. The overall effect evokes some of the most beautiful achievements of Louis-Jean Desprez (1734-1804), a specialist in drawings of night effects. It should be noted, however that the Franco-Swedish artist [ie. Desprez]will not arrive in Italy until 1776, after having obtained the Grand Prix for architecture.’

A companion drawing by Vincent of A Sacrifice to an Egyptian God, of the same date and of similar dimensions, is in the Nationalmuseum in Stockholm. As Cuzin has noted of this pair of drawings, ‘The two very highly finished sheets, each with a large number of figures, are the most ambitious compositions from the early period of Vincent, a young pensioner in Rome. These are, of course, drawings made for themselves and not studies for painted compositions. The energetic movements of the figures, the organization of the crowds, the drawing of the draperies, and particularly that of the hands, in a contrasting chiaroscuro, recall Parisian works like the painted sketch of the Assumption executed the year before. Of note is the importance assumed by the white gouache, used more or less diluted to obtain highly pictorial effects, and not just simply reserved for highlights.’ These two drawings of Egyptian subjects by Vincent reflect not only the artist’s interest in the antique world beyond Greece and Rome, but also the taste for Egyptian subjects in France in the late 18th century, inspired by the publication of such scholarly works as the Comte de Caylus’s Receuil d’antiquités égyptiennes, étrusques, grecques, romaines et gauloises, which appeared in several volumes between 1752 and 1767.

Only a handful of other drawings by Vincent may be dated to the first year of his stay in Rome. Of the same date as the present sheet, and also of considerable dimensions, is a signed and highly finished drawing of The Arch of Constantine in Rome, in a private American collection.