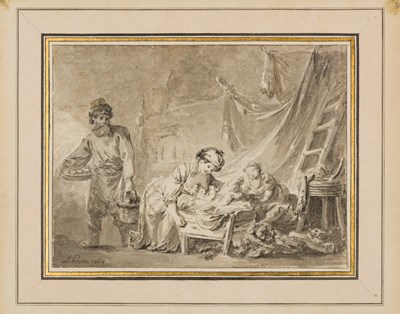 A Russian Peasant Family in an Interior


Signed and dated 1767, the present sheet is a fine and charming example of the numerous genre scenes set in Russia that Jean-Baptiste Le Prince produced after his return to France. As Kimerly Rorschach has written of Le Prince, ‘the artist distilled his observations of Russia into a series of images which served him throughout his working life. Repeated in paintings, drawings, prints and tapestries, Le Prince’s images brought the exotic flavour of far-away Russia into the drawing rooms of many a fashionable Frenchman.’

A finished watercolour of a similar domestic subject of a Russian family in an interior, though different in composition, is in the Musée Départemental des Vosges in Epinal.

A Russian Peasant Family in an Interior