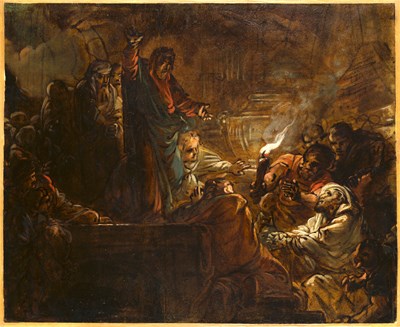 The Raising of Lazarus


This large oil sketch is a preparatory study for one of Jean-Baptste Deshays’ last major works; a painting of The Raising of Lazarus, exhibited at the Salon of 1763 and long thought to be lost. The painting has only recently been rediscovered and is today in the Horvitz Collection in Boston. Although not listed in the livret of the 1763 Salon, The Raising of Lazarus was praised by Diderot and mentioned by other critics in reviews of the exhibition that year. It was described as a horizontal composition measuring three by four pieds; a description in keeping with the Horvitz picture.

Two further treatments of the subject of The Raising of Lazarus by or attributed to Deshays are known, both vertical in format. A pen and wash drawing in the Louvre, with an arched top, has generally been thought to be a study or first idea for the Horvitz painting, while an oil sketch formerly in the collection of Andrew Ciechanowiecki, also with an arched top, has likewise been related to the 1763 Salon picture. While they are quite different in composition, the Louvre drawing and the ex-Ciechanowiecki sketch share a number of motifs with both the present sheet and the Horvitz picture. As such, they may represent Deshays’ first ideas for the painting as a planned vertical composition, which he later abandoned in favour of the horizontal format seen in the present sketch and the final picture. In all four works, prominence is given to the praying figure of Lazarus, seen at the lower right of the composition, while in all but the final painting there is an equally prominent figure of a man holding a torch or candle. All four works share an interest in dramatic lighting effects – a characteristic feature of much of Deshays’ work - along a prominent diagonal axis, though this is perhaps more marked in the two oil sketches.

This large sheet, with its freedom of execution and vigorous handling of the brush, is a fine and characteristic example of Deshays’ oil sketches. In handling and technique, as well as in the summary treatment of faces, drapery and hands, it may be compared with a number of oil sketches by the artist. These include such studies for altarpieces as a Punishment of Saint Andrew in the Musée des Beaux-Arts in Strasbourg and a Marriage of the Virgin in the Musée de la Chartreuse in Douai, both of which are on canvas, as well as an oil sketch on paper of Aeolus and Marsin a private collection. In his catalogue raisonné of the works of Deshays, André Bancel noted that the tonality of the present oil sketch is very close to that of the Douai Marriage of the Virgin, which is of about the same date.

As one recent scholar has commented, ‘Deshays had a predilection for the sketch made with the brush as a preparation technique. The dynamic quality of the sketch accords well with his often dramatic subject matter, and he produced a great number relative to his overall output. They are...loose and energetic in their brushwork, yet with a fine sense of proportion and volume often absent in vigorous sketches.’ Margaret Morgan Grasselli’s comments on a stylistically similar oil sketch by Deshays in the collection of the National Gallery of Art in Washington, DC, are equally relevant to the present work: ‘Although unfinished in the sense that it lacks polish and detail, this kind of sketch was highly regarded in the eighteenth century for the brilliance and immediacy of its execution and for the swift, unstudied way it expresses a moment of inspiration.’ It is arguably in oil sketches such as the present sheet, rather than in his relatively few surviving finished paintings, that Deshays’ abilities can be seen to their best advantage.

The Raising of Lazarus