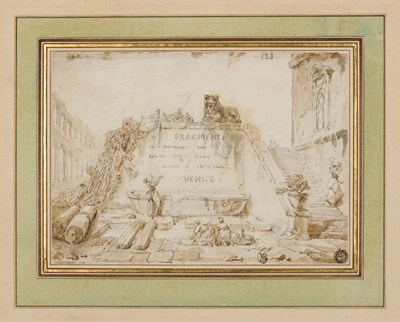 Laundresses at a Fountain: Design for a Frontispiece


Hubert Robert produced several drawings for title pages or frontispieces for albums which he compiled of his drawings made in Italy. (Although more than fifty sketchbooks or albums of drawings are listed in the catalogue of the posthumous sale of the contents of Robert’s studio in April 1809, only three have survived intact to this day.) Examples of drawings by Robert for frontispieces are in the Louvre, the Musée des Beaux-Arts et d’Archéologie in Besançon, the National Gallery of Scotland in Edinburgh, and elsewhere. Robert also designed a number of frontispieces for others during his time in Italy, such as for the Comte de Caylus’s Receuil d’Antiquités, published between 1752 and 1767.

A slightly larger variant of this composition, with added touches of watercolour and different lettering, is in the Louvre. The Louvre drawing served as the frontispiece of an album, now disbound, of thirty-nine drawings of Roman views by Robert entitled 'Ensemble de vues variées dessinées à Rome par H. Robert 17…'. While the precise date of the album is unknown, it has been dated to c.1764-1765, during the artist’s last years in Rome.

The provenance of the present sheet includes three notable French collectors of 18th century drawings. The drawing was part of a significant group of over three hundred 18th century French and English drawings – including works by François Boucher, Jean-Honoré Fragonard, Hubert Robert, Gabriel de Saint-Aubin and Jean-Antoine Watteau – which were sold from the collection of the collector and antiquaire Alfred II Beurdeley (1847-1919) at auction in Paris in 1905.

The drawing was probably acquired at the 1905 Beurdeley sale by the eminent expert and auctioneer Marius Paulme (1863-1928), who assembled a highly significant collection of 18th century French drawings that was dispersed at auction after his death.

The present sheet then passed into the ownership of eminent collector Georges Dormeuil (1856-1939), who began assembling paintings, drawings and works of art around 1890, and was active at many of the major auctions held in Paris between 1895 and 1922. Dormeuil’s collection of paintings and drawings displayed a particular focus on works of the 18th century, and included several works by artists such as Boucher, Cochin, Fragonard, Greuze, Huet, Leprince, Perronneau, Robert, Saint-Aubin and Watteau, among many others. He also collected drawings by a handful of French artists of the 17th century, notably Dumonstier and Lagneau. In 1934 he presented several important objets d’art to the Louvre, as well as three drawings by Gabriel de Saint-Aubin to the Musée Carnavalet in Paris.

Laundresses at a Fountain: Design for a Frontispiece