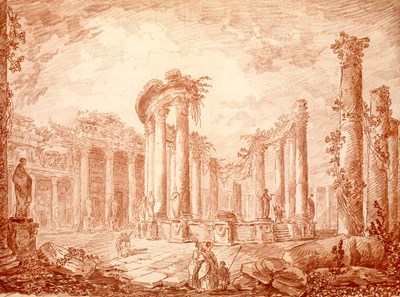 
Excavated in 1750, the so-called Temple of Jupiter Serapis at Pozzuoli, near Naples, was long thought to have been a temple to the ancient god Serapis, due to the discovery of a statue of the Greco-Egyptian god at the site. It is now known, however, to have been the macellum, or public marketplace, of Pozzuoli. The building was in the form of a square courtyard bordered by an arcade made up of thirty-four columns and decorated with statues. In the centre of the courtyard was a tholos; a circular building standing on a podium, with sixteen columns supporting a domed vault. By the 18th century, however, all that remained at the site was a row of three tall marble columns.

This large and impressive sheet dates from 1760, when Robert and the Abbé de Saint-Non travelled together to Naples to prepare the illustrations for the Voyage pittoresque, ou description historique des royaumes de Naples, et de Sicile. Like other drawings of the ruins at Pozzuoli by Robert, the artist has here partially reconstructed the Serapeum ‘temple’ to create an imaginary view of the site. Nevertheless, this is something of an idealized reconstruction, as there was no way all the elements in this drawing could have been seen from a single viewpoint. Robert was, in fact, criticized for this by Dominique Vivant-Denon, who was on the same trip to Naples with the artist and Saint-Non.

The print of this view engraved by Louis Germain and Jean-Baptiste Liénard1for the second volume of Saint-Non’s Voyage pittoresquedepicts the scene from a slightly different angle than the present sheet, and would appear to be based on a red chalk drawing by Robert sold at auction in London in 1972. The same drawing also served as the basis for a large finished watercolour now in the Biblioteca Reale in Turin.

Robert made at least three other drawings of the so-called ‘Temple of Jupiter Serapis’ or Serapeum at Pozzuoli, from different angles. These include a large sheet in red chalk in the Museum of Fine Arts in Boston and another in a private collection, of which a variant is in the Albertina in Vienna.

In all of Hubert Robert’s drawings of the macellumat Pozzuoli, as Catherine Boulot has noted of a related watercolour of the same site, the artist ‘has shown a classical building tumbling into ruin, with walls crowned in plants which add a decorative quality. His vision is indeed far more than of a painter than an architect…These drawings, paintings and prints reveal the importance Robert must have attached to this reconstruction of the Serapeum.’

The Ruins of the Macellum (‘Temple of Jupiter Serapis’) at Pozzuoli