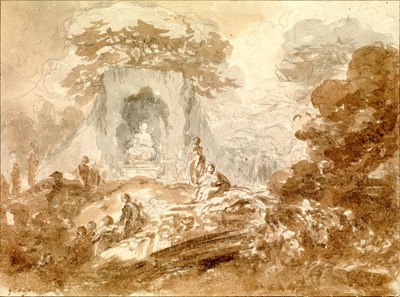 A Statue in a Garden


In the summer of 1760, the painter, engraver and amateur Jean-Claude Richard, Abbé de Saint-Non, invited the young Fragonard, then a student at the French Academy in Rome, to join him for several weeks in July and August at the Villa d’Este in Tivoli. There Fragonard was inspired to make a number of superb red chalk drawings of the extensive gardens of the Villa, as well as views of the town of Tivoli and its famous waterfalls. Natoire, writing from Rome to the Marquis de Marigny, director of theBâtiments du Roi, at the end of August 1760, noted that ‘M. l’abbé de St Nom [sic] has been at Tivoli with the painter Pensioner Flagonard [sic] for a month and a half. This amateur is keeping himself greatly amused and much occupied. Our young artist is making some very fine studies that will serve him well and do him much honour. He has a very lively taste for this kind of Landscape in which he introduces rustic subjects with great success.’

Drawn with incredible freedom in brush and wash, this atmospheric landscape drawing is likely to have been made during or shortly after Fragonard’s summer at Tivoli in 1760. As one scholar has described the drawing, ‘The shadowy, diffuse figures in the foreground seem to be worshipping, or at least contemplating, the statue of a female figure set on a pedestal in a niche or grotto. The latter is placed at the end of a vaguely defined structure, natural or man-made, which compounds the enigmatic quality of the scene.’

The present sheet may be included among a handful of small-scale, early landscape drawings in pen and wash by the artist, all datable to around 1760, which ‘represent some of Fragonard’s earliest independent experiments with wash techniques, in which he is a draftsman still devoted to line, but at the same time he is discovering a natural and instinctive expression through atmosphere and color.’ Executed during the first of Fragonard’s two stays in Rome, these drawings share a similar use of ink and wash over a black chalk underdrawing.

Other stylistically comparable small landscape drawings by Fragonard of c.1760 include A Temple in a Garden in the collection of the Peabody Institute, on loan to the Baltimore Museum of Art, a Scene in a Park in the Cleveland Museum of Art and a Garden in an Italian Villa in the collection of Jean Bonna in Geneva. Two further drawings from this group are A Wooded Landscape with Figures on a Bluff, formerly in the collection of Dr. and Mrs. Francis Springell and sold at auction in 1986, and A Couple in a Park, at one time in the collections of Camille Groult and Jacques Bacri and recently sold at auction in Paris. A somewhat more sketchy Italianate landscape drawing in pen and wash of the same period was on the French art market in 1986.

As Eunice Williams has written of the Baltimore and Cleveland drawings noted above, in terms that apply equally to the present sheet and others from of this same group of small pen and wash landscapes, ‘The scale and decorative concept [of these drawings] may seem far removed from Fragonard’s great sanguine landscapes made in 1760 during his stay at the Villa d’Este; but these works, regardless of size, share related ideas of compositional structure. The unifying principles are surprisingly classical in their emphasis on formal balance and deliberate contrasts and on clearly defined space. Depth is usually limited or blocked, and lateral space is contained by framing devices such as trees or architectural features. Staffage provides a sense of scale and animation. The sanguine series made at the Villa d’Este records identifiable sites, while the group of small, early wash drawings…may depend more on the artist’s invention. It is significant that they both reflect traditional principles of composition which Fragonard had learned in his academic training from Vanloo and Natoire, and from his own study of artists of the past.’

A Statue in a Garden